Learn About the Art > About Old Pawn Jewelry > Old Pawn 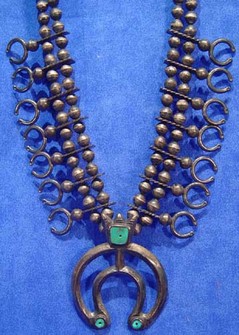 A magical term in the Indian art world, “old pawn” is usually misapplied when spoken out of ignorance of the cultural context to which it was originally assigned.  Early trading post traders relied on their Navajo neighbors to be their best customers, as tools, rope, trade blankets, food, and general supplies were the primary products which the trader sold.  Building a good customer base among the Navajo required the trader to become a trusted member of the community, and to do so, he often wore many hats. Settling disputes, loaning materials and money, providing shelter for Navajos traveling from distance, and even taking care of the body of a deceased Navajo whom no one claimed or wanted to deal with, were just some of the trader's responsibilities.

The pawning system was established and regulated under the BIA (Bureau of Indian Affairs), and provided that the trader could loan money on an item for 1 year during which time the owner could retrieve it for the loan amount plus 10%.  The regulations also required the trader to tell the owner when the year was coming due, and, if the item was not reclaimed, the item went to dead pawn status, after which the trader than could sell the item to anyone. Nonetheless, it was usually in the trader's best interest not to sell items that went into dead pawn as to not offend the owner - as this would then hurt the trader's reputation in the community. In fact, most early pawn was never intended to “go dead and unclaimed,” particularly as the loan was often for only a fraction of the item's value. For the Navajo, the items were placed in pawn for multiple reasons.  Not only would you receive some quick cash or goods, but secondly, the items were pawned for safe-keeping in the owner's interest. This was a practical solution to the Navajo owner, who often moved with his sheep herd, and had few options as to where to hold valuables.  In addition to being relatively safe, the jewelry was usually on display with its pawn ticket, and all the other Navajo patrons of the post could see the items, thereby raising the status of the owner.

Material wealth for the Navajo had traditionally been measured in animals and in blankets. The Navajo knew little of banks, and paper money had no value to them. When a wealthy Navajo (one with many sheep and goats) saw that the trader placed value on the silver jewelry, and that credit could be obtained with it, he began to commission local smiths usually paying in sheep or goats.  The trader, preferring jewelry over animals, was more familiar with silver, and happy for a more versatile trade item; the smith was happy to increase his flocks, and the heavy weighted jewelry brought prestige to the owner and better credit from the trader.  As the pawning system became established, jewelry took center stage as the item of choice to work with.

Often, Fred Harvey jewelry, made between 1910 and 1930, is referred to as "old pawn" jewelry (or at least placed within that category for dating purposes). However, reality is that the traders who catered only to the Navajo would not put the Fred Harvey style jewelry in their cases as the Navajo didn’t care for it. Consequently, most of the Fred Harvey jewelry was made and sold on or near the railroad which skirted the southern part of the reservation, and was not "pawned" for the various reasons aforementioned.

With the appearance of the automobile on the reservation in the 1930s,  the northern part of the reservation, still heavy with old pawn, became the center of focus for museums and collectors to try to build collections of “old pawn” before it disappeared (as did all the old ways). Additionally, the traders, now seeing new tourists for the first time saw their dead pawn depleting, and, to replace stock, started buying some of the Harvey style jewelry.  This was a win-win for the trader, as a Harvey piece sold to a tourist brought in money to the post, yet he was able to keep in favor with his local Navajo by not selling the dead pawn yet to be claimed.  Over time, the Navajo, who began seeing the lighter weight, shiny Harvey jewelry, began to accept it more and more and incorporated it into their lives - although the heavy “Old Pawn” would always remain the prize.