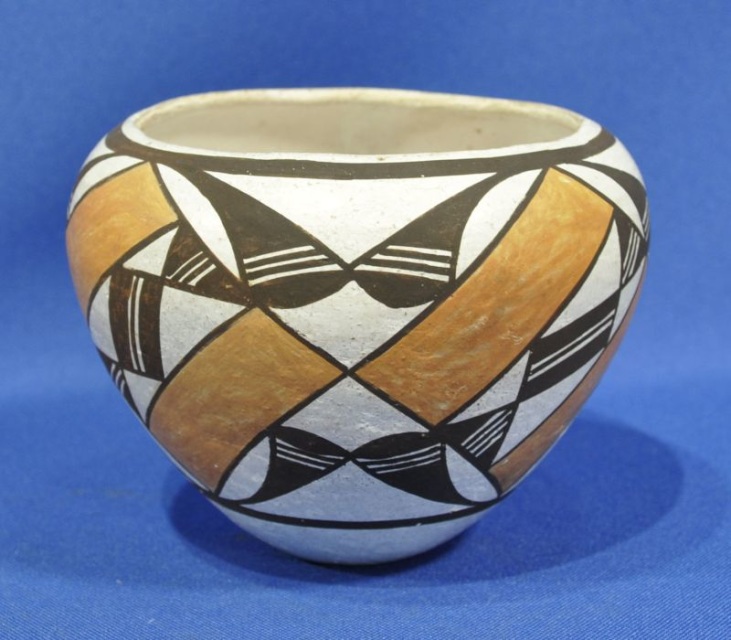 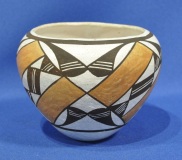 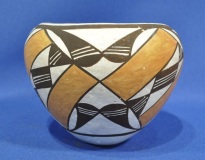 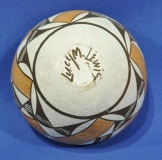 Signed on base with fired on painted signature "Lucy M. Lewis". In Excellent Condition.

A leading Native American potter, Lucy Martin Lewis spent her entire life in Acoma Pueblo, New Mexico, leaving only to teach ceramics workshops across the country. For more than seven decades, she practiced the art of making dung-fired white pottery, noted for its black ​“thin-line” geometric abstractions derived from ancestral designs. First sold at roadside stands, her pottery became so prized that it is now in museum collections, including the Smithsonian Institution. In 1983 Lewis was honored with the New Mexico Governor’s Award, one of many she received in recognition of her work.

Lucy M. Lewis remembered making pottery as a small girl in the Acoma Pueblo in New Mexico, one of the oldest continuously inhabited dwellings in North America. Like many American Indian potters, Lewis learned through observation and experimentation rather than formal training. She watched other Acoma women, particularly her aunt, make traditional pottery that was typically used for religious ceremonies. She also used local clay, whose location is known only to residents of the pueblo.

Lewis initially produced unsigned objects with traditional Acoma designs and sold them along nearby highways like the historic Route 66. She began signing her pottery, however, as her personal style developed and she incorporated new interpretations of traditional designs and patterns. She also used shards of ancient pottery in her work and as inspiration, unlike other Acoma potters who used broken pieces from their own work. Lewis won her first award, a blue ribbon at the 29th Inter-Tribal Indian Ceremonial, when she was forty-eight, and her career flourished until her death. Many of Lewis’s children and grandchildren continue her legacy by making pottery of their own.