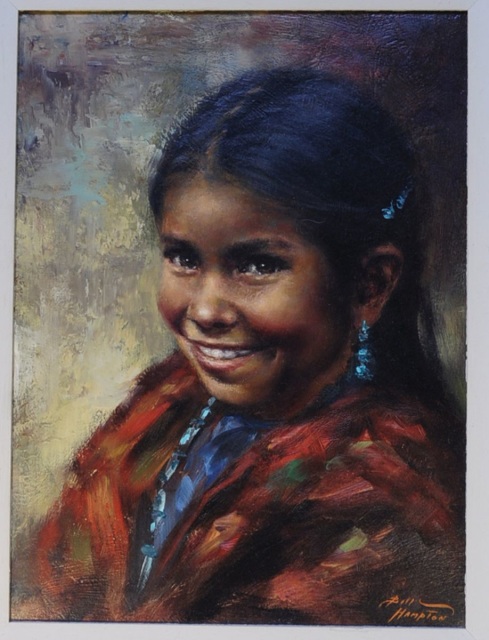 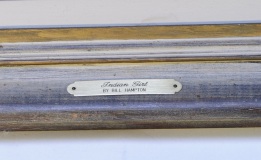 SKU: 150620-01
$1,250.00
$1,250.00
Unavailable
per item
15 1/2" x 11 1/2"
22 1/2" x 18 1/2"
Bill Hampton was born and raised on a ranch in Simi Valley, California. As early as six years of age he was painting murals on the walls of the schoolhouse which he attended. He began painting horses and Vaqueros at an early date, and at age nine won a statewide contest with a sculpture of a water buffalo.
Hampton served in the Navy Air Corps during World War II and went to work at the Walt Disney Studio when he returned to civil life. Within a short time he left Disney and began the struggle to become a professional painter.
Hampton's style is representational realism, and he specialized in portraits of Indian girls and children, as well as cowboys and horses. He often began his work with a pencil sketch, progressing to pen and ink as he developed the character of the face, and then produced a finished painting in oil. Hampton did not work from live models or photographs, but used his keen observation of people to create his detailed portraits. He was an admirer of the old masters, but was completely self-taught as a painter.
Hampton felt his interest in Rembrandt was what contributed to the remarkably accurate flesh tones of his portraits, a characteristic often remarked upon by people who knew and collected his art. During the 1960s and 1970s Bill Hampton exhibited his work at the Saddleback Inn Gallery in Santa Ana. He lived in the high desert region near Apple Valley and worked from a studio in his home.
He was married and had two daughters and a son. Hampton died unexpectedly, at home, in 1977 at age 52. Bill Hampton's art supplied many of the cowboy and Indian characters that appeared on Leanin' Tree fine art greeting cards and prints beginning in the late 1960s and continuing until today.