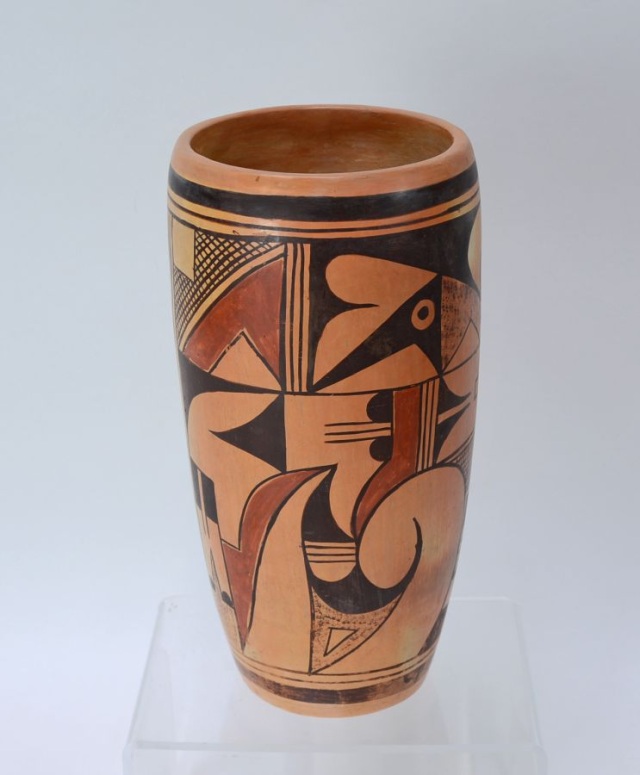 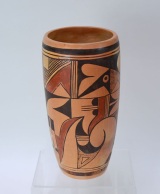 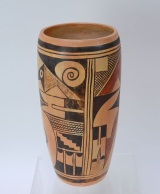 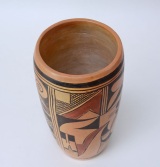 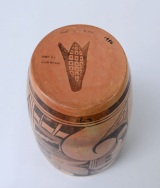 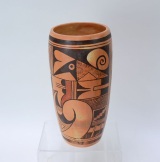 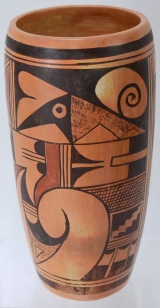 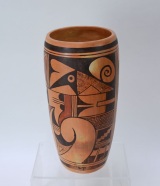 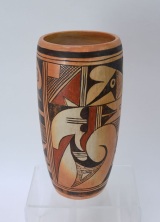 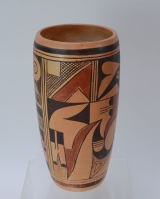 Lena Chio Charlie - Corn Woman was Corn Clan. She signed her pottery with an "ear of blue corn" hallmark. A number of other Hopi potters also have used the corn hallmark, so one must be careful to check which potter's symbol one is seeing. Charlie was an excellent potter. Her designs were well balanced and well executed.

According to the Museum of Northern Arizona publication Plateau, Vol 48, Nos 3 & 4, Spring 1976, Lena Chio (Charlie) is known to have been an active potter from 1933 to 1961. Based on this period of production, it is concluded that she has passed away, but I have not been able to ascertain an actual date of birth or date of death for her. If the statement below is accurate, we know she was born before her dad passed away in 1918. Assuming she was less than 20 years of age when she married for the second time in 1928, then her birth year would probably have been 1908.

According to one source, Lena Chio was a granddaughter of Nampeyo of Hano and Lesou. She was the daughter of their oldest son, Qoo-ma-lets-tewa (Mad Bear), who died in the year 1918 as a result of the flu. She married her second husband, Victor Charlie, in 1928. (Personal conversation with Maurice M. Bloom, Jr., 1983.)

Hallmark signature of Lena Chio Charlie (ca.1908-ca.1960s) Corn WomanIn another reference, she is listed as Lena Charlie, and the sister to Irene Shupla and Hazel Shupla, and the mother of Sunbeam David, which would make her the grandmother of Neil David, the well-known Hopi-Tewa painter and katsina doll carver. (Schaaf)

In still another reference, she is said to be the niece of Nampeyo. When Nampeyo's vision was deteriorating, and she was unable to paint her pottery anymore, she would often take pieces to Lena for her to paint, if Annie or Fannie were unavailable to help their mom. (Kramer)

I think it is safe to say she was related to Nampeyo, but the relationship is not definitively defined.

Lena signed her pottery with an ear of corn hallmark, the meaning of which was blue corn.

Nampeyo and Her Pottery by Barbara Kramer