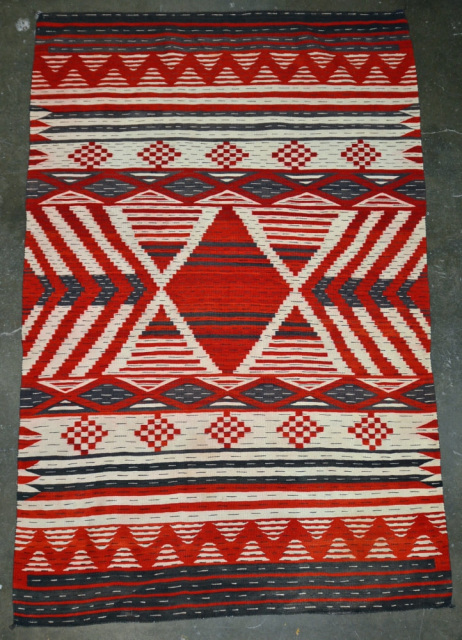 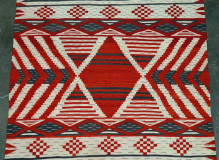 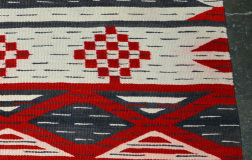 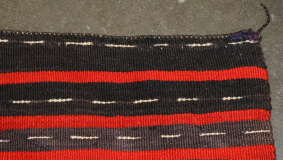 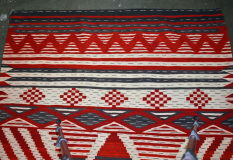 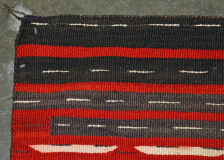 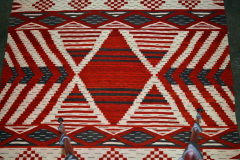 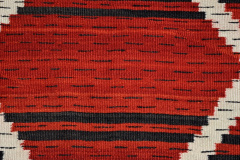 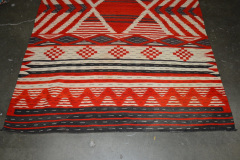 A particularly handsome example of the Crystal classic revival blanket as pictured in the JB Moore 1903 catalog as Plate II. Excellent overall condition. Light fading (on the side with the ribbon) and light wear to the bottom cord.

A cloth ribbon has been hand sewn to one side to facilitate a bar for wall hanging. This can be easily removed with no damage

Moore arrived at Narbona Pass in 1896 and bought the trading site, which until then had been open seasonally without permanent buildings. Moore cut timber in the mountains and hauled it down to build a log trading post, which he stocked with supplies carted from the rail head in Gallup. He named his establishment the Crystal Trading Post.[1] Moore wrote of the trading post in 1911, "it is also our mission here to buy any and everything the Navajo has to sell ... to sell him in turn ... everything, in fact, that he has need for."[5]

During the winter months, Moore employed Navajo weavers to make rugs. He ensured that the wool and the weaving was good quality, and created designs of his own,[a] quickly gaining a reputation as a source of good quality rugs.[1] He would buy local wool, but send it for mechanical cleaning and carding to eastern woolen mills.[6] The mills would also dye some of the wool in blue or black. Moore would issue the dyed wool, along with undyed gray and brown wool, to the most skilled weavers.[5] In a break with tradition, Moore had the sixteen or so weavers who worked for him repeat the same design again and again.[7] In a 1910 article, Moore noted that many excellent weavers were under twenty years old, and often the older women suffered from trachoma or other problems with their eyes that prevented them from producing good quality rugs. He paid low wages. Talking of the weaver's life, he said, "there is no more dismal wage proposition than her remuneration for her part in the industry. Given any other paying outlet for her labor, there would very soon be no such thing as a blanket industry ... it is her one and only way of earning money."[8]

Moore's business flourished, and in 1903 and in 1911 he published mail-order catalogs, drawing business from across the United States.[1] In his 1903 catalog, Moore made much of the authenticity of his products. The catalog included photographs of the interior and exterior of the trading post and the land around it, and of Navajo people, outdoor looms and hogans. He said: "While this booklet makes no claim of being a pioneer in its field, I think it may claim to be the first of its kind published and distributed from the very center of the Navajo Indian Reservation, by an Indian trader living among and dealing directly with the Indans who makes the goods which it illustrates and describes."[9] Moore left the reservation in 1911 due to a scandal.[10] He sold the post to his manager, Jesse A. Molohon.[11] Molohon continued to introduce complex non-Navajo styles that probably drew on Oriental rug designs