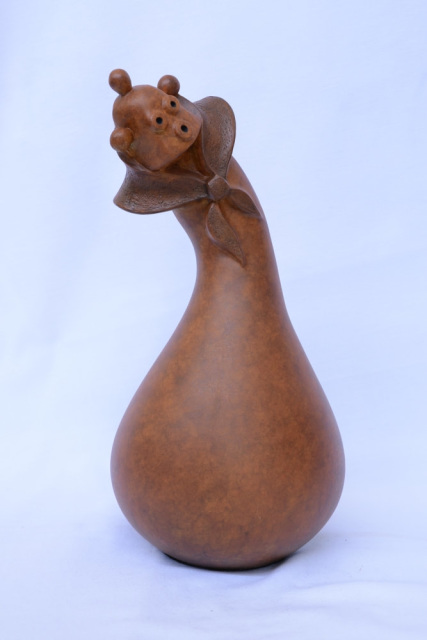 Kim Obrzut started her art career as a child finding rocks in the washes in Arizona and painting figures, which her family still keeps today. She started sculpting her Hopi maidens over twenty years ago and still has yet to scratch the surface of her cultural history. ''The Hopi Tribe of Northern Arizona, is thousands of years old. I have a lifetime to fully explain my people and their history. I know many of my collectors now understand more about the women and their powerful place in Hopi history.''

She originally worked in the traditional scrape-and-smooth method, which Hopi potters have used for thousands of years. Kim's degree from Northern Arizona University in Fine Arts, sculpture and bronze casting has become to be a personal satisfaction for her art career.

Kim has been casting bronze for over 21 years and continues to enamor her collectors and the Southwest art scene with her latest designs. ''My bronze career has really taken off, and has earned me positions in museum, corporate and private collections all over the world.'' Kim is one of the first Hopis to work in bronze as an Art Medium and one of the first American Indian Women to work in bronze, which is historically a male dominated field of Art.

Kim sitting in her studio once remarked, ''After the Corn was plenty, the Arts were born to the Hopi;'' in other words, the Hopi prayed, worked and cared for their family and then the arts we know today were created to perpetuate their history. Kim's three girls are almost grown and her time to focus on Art is growing. Her career is mirroring her statement.

Kim has been featured in many national magazine articles and her works have been published in various books on Southwest Art. She has won numerous awards in Art and Sculpture shows across the United States in both Native and non-Native events.

She travels to several art shows across the US each year so she can personally meet her collectors and convey the stories of the Hopi people and her art in person. She has also had the privilege of being able to serve for two years on the Board of Directors for SWAIA, who runs the Santa Fe Indian Market, the largest American Indian Art show in the United States in August on the plaza of Santa Fe, New Mexico.