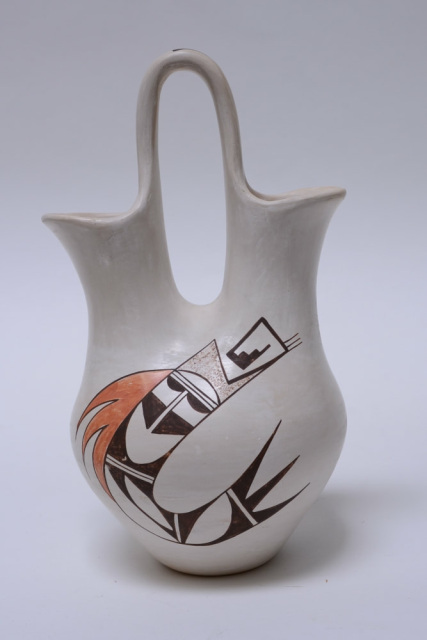 Joy Navasie (second Frog Woman - Yellow Flower) was among the most famous of Hopi-Tewa potters. She learned the skill from her famous mother, Paqua Naha, the first Frog Woman. Joy was born in 1919 and recalls that she started making pottery when she was about 17 years old. Paqua Naha, just a few years before she passed away, developed the white ware pottery style in the mid-1950s. Joy Navasie picked up the tradition and continued it until her retirement in 1995. Now, her daughters (Marianne Navasie, Leona Navasie, Natelle Lee, Loretta Navasie Koshiway and Grace Lomahquahu) have continued the tradition. Joy Navasie signed her pottery with a frog hallmark, as did her mother. There is a difference in the way they each drew the feet of the frog. Paqua Naha used short straight toes and Joy Navasie used webbed toes.

The wedding vase has been part of Pueblo life for centuries. The two spouts represent the separate lives of the bride and groom, which are united by the bridge at the top. The groom’s parents provide the wedding vase for use in the ceremony. On the day of the wedding, the vase is filled with holy water and given to the bride. She drinks from one side and the groom drinks from the other. This ceremony is equivalent to the exchanging of wedding bands.

The wedding vases presented here are meant to be used for display only and make wonderful wedding and anniversary gifts. Ceremonial pottery is considered sacred and is only made and given as gifts among tribal members. The pottery must be fired in a certain way to be hardened against water permeation, or otherwise sealed using pine pitch or wax.