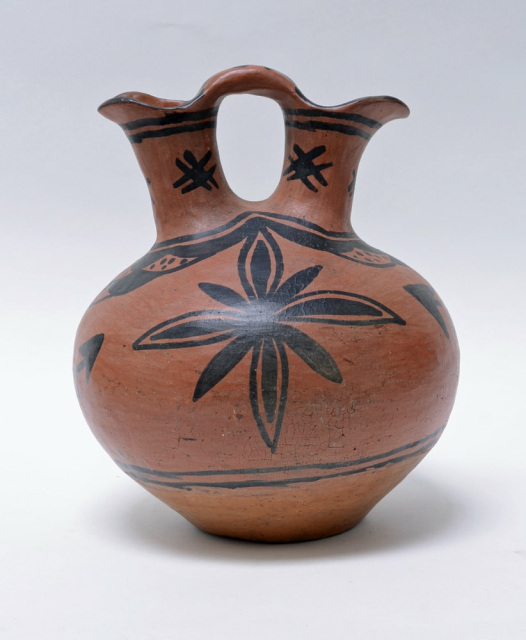 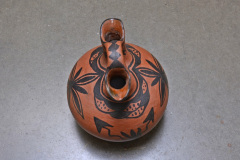 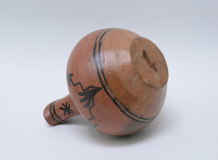 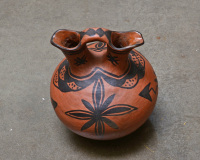 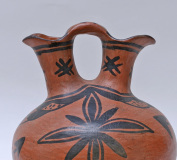 Condition: Excellent... with only very minor restoration on the outter edge of the lips to the spouts.

According to Jonathan Batkin there were very few potters at San Ildefonso Pueblo in the late 1800s and early 1900s. Because of this, tradition remained strong and, as a result, the work of some potters could be identified even though they were not signed.

It is known that Martina Vigil (1856-1916) and her husband Florentino Montoya (1858-1918) made San Ildefonso Black-on-red pottery, but they were not the only ones to do so. According to Batkin, who conducted a thorough survey of turn-of-the-century census records, there were only 8 potters at San Ildefonso Pueblo listed as such by the census taker.

The eight potters were probably Martina Vigil, Maria Martinez, Maximiliana Montoya, Nicolasa Peña, Marianita Roybal, Tonita Peña, Susana Aguilar and Dominguita Pino. Another one could have been Tonita Roybal.  All of them are known to have produced San Ildefonso Black-on-red pottery style.

This jar would have been made by one of these women, sometime around 1900-1910, but it would take someone like Jonathan Batkin to attribute it to a specific potter and painter. It is quite possible that it was made by Dominguita Pino and painted by Crecencio Martinez. It is just as likely that is was made by Tonita Roybal and could have been painted by Alfredo Montoya. It was traditional for the men of the pueblo to paint pottery for the women, not only for their wives but others as well.

Recommended Reading: Pottery of the Pueblos of New Mexico 1700-1940 by Jonathan Batkin