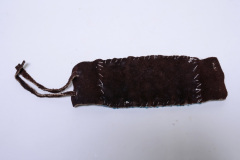 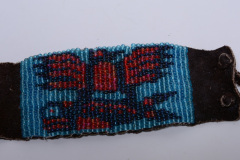 Whale was a monster, killing other whales and depriving the Quileute tribe of meat and oil. Thunderbird, a benevolent supernatural being, saw from its home high in the mountains that the people were starving. It soared out over the coastal waters, then plunged into the ocean and seized Whale. A struggle ensued; the ocean receded and rose again. Many canoes were flung into trees and many people were killed. Thunderbird eventually succeeded in lifting Whale out of the ocean, carrying it high into the air and then dropping it. Then another great battle occurred on land.

In another variant, the flapping of the Thunderbird's wings is the source of the thunder

Owners notes: "While taking a vacation with friends on their 44' yacht, we came to Nootka on Vancouver Island. When we got of the boat, locals came up and I asked if anyone had baskets. She quickly ran back to her home and shortly thereafter came with an armload of baskets and other items, of which I bought them all. Most of the baskets were newer, but a few were older. Many more Nootka came to our boat, fascinated with it, but after we bought all the baskets they left to go to town to buy things."