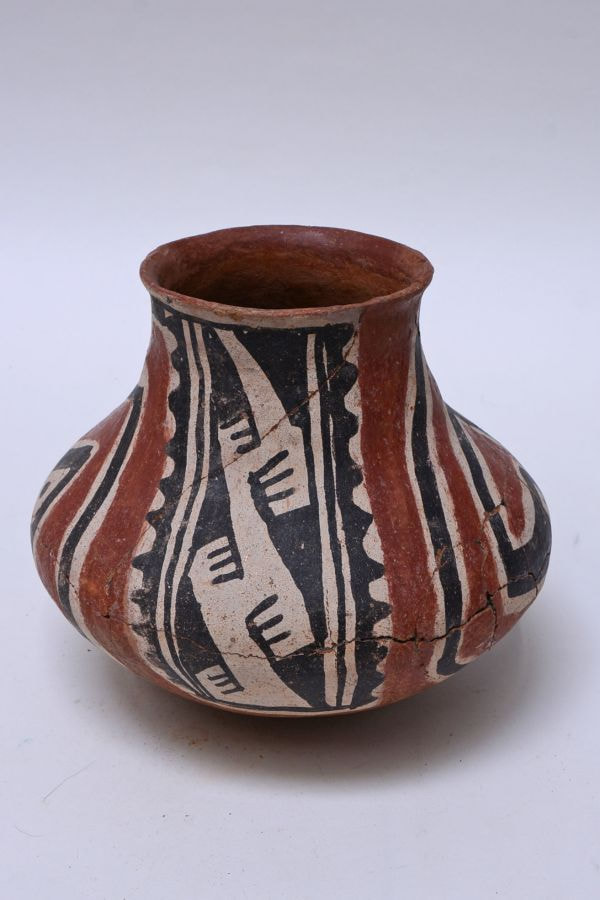 Medium sized jar with "old timer" glue job, some masking tape still on inside. Appears almost entirely original, maybe a bit of "mud" in a couple cracks and at a rim chip. Overall in Very Good Condition.

Gila Polychrome was described by Gladwin and Gladwin (1930). This type refers to Salado Polychrome forms that developed out of Pinto Polychrome(Crown 1994; Hayden 1957; Lindauer 1994; Young 1982). Gila polychrome appears to have been first produced around A.D. 1300, and it is most abundant at sites dating to the late A.D. 1300s. It lasted into the middle 1400s (Crown 1994; Lindauer 1994). Gila Polychrome is represented by both bowl and jar forms.

Gila Polychrome bowls consistently displays distinct buff or cream colored slips on the decorated surface, although reduced examples may be white to gray. Exterior surfaces of bowls exhibit a red slip that may cover the exterior surface. On jars this red slip may occur as a band around the base and as a band near and around the neck. . Painted decorations are usually in a black organic paint on light colored pastes, sometimes in combinations with painted decorations in red clay. Painted designs of Gila Polychrome usually begin as bands or life lines directly below the rim. These may occur as wide isolated lines that may occur as a series of connected triangles or squares, or as thin lines incorporated into a group of solid motifs. The lines occur on the jar exterior at the bottom of the neck or below the design band, and may be continuous or exhibit a break. Gila Polychrome painted designs tend to be bold, large, and fairly simple. Motifs appear to have been expediently executed with relatively few brush strokes. Painted decorations cover much of the surface, and often result in the creation of negative designs in empty space. Solid designs predominate, although hatched designs may be present. Hatching, when present, tends to be thicker on Gila Polychrome when compared to earlier types. Motifs are often organized into complex rectilinear and curvilinear abstract representational figures. Painted decorations on bowls cover much of the interior surface. This decoration does not extend to the rim, but usually begins with an isolated or incorporated encircling line near the rim, filling the remainder of the interior. Designs on jars often include a banded design framed by lines along the neck and a larger design covering all of the remaining part of the vessel except the lowest part of the base. Areas between painted designs and the unpainted base are often covered by unpainted bands of red slip.