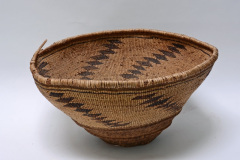 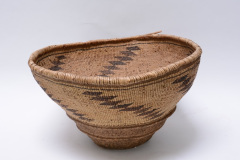 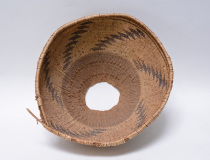 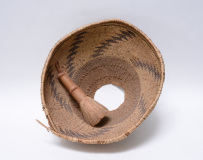 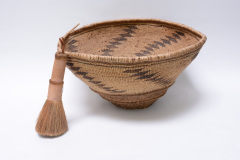 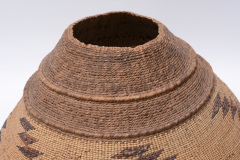 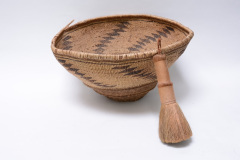 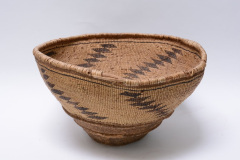 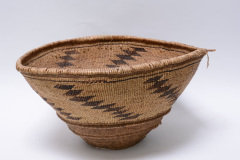 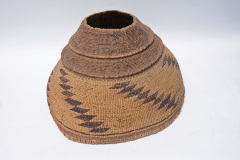 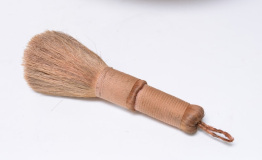 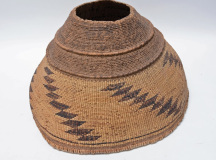 Their name also is spelled as "Pitt River" in historical records. The eleven bands of the Pit River Tribe speak the closely related languages: Achumawi and Atsugewi. These are both Palaihnihan languages, believed to belong to the Hokan language family.

Northeast California: This region includes the Cascade ranges east of the Klamath Mountains, which include Mt. Shasta; major rivers including the Pit and McCloud rivers. East of the Cascades are the Modoc Plateau, a volcanic region drained by The Hat Creek and Fall Rivers in the southern part, and The Great Basin, a dry scrub land east of the Warner Mountains, which extends into Nevada. The tribes of this region we focus on are the Pit River (Achomawi), Hat Creek (Atsugewi), Wintu, Modoc and Klamath (although of Southern Oregon, their basketry is so similar to the Modoc we include them in this section). The basketry motifs are primarily woven using the full twist overlay technique which distinguishes these baskets from those of their western neighbors.

The Wintu, Shasta, Atsugewi (Hat Creek) and Achomawi (Pit River) are all NE Northern California tribes which used the Full-Twist overlay technique which is easy to identify as the pattern is view-able on both the exterior and interior of the basket. All used open and closed twining and their baskets are generally taller and less complex in pattern than the NW tribes baskets. The Atsugewi used more redbud in their overlay than the Achomawi, and the Wintu used alder dyed fern for their red overlay (which was relatively rarely used). The Atsugewi often used latice twining on the base, unlike the Achomawi. Shasta baskets are hard to differentiate from the other groups.