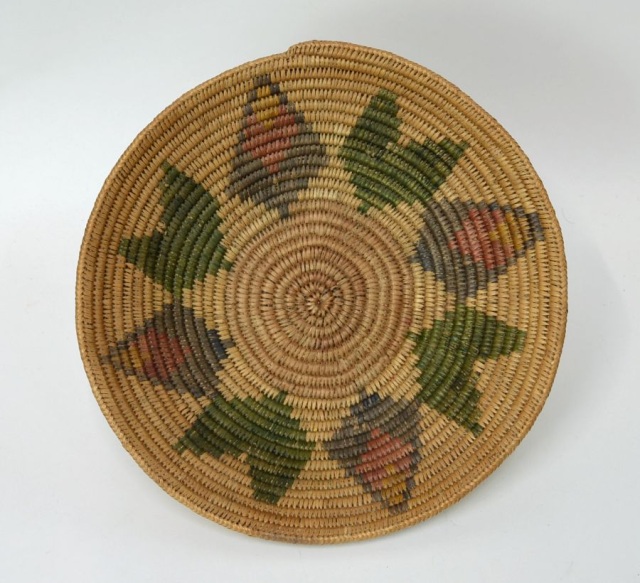 The Jicarilla Apache occupy a small reservation centered in and around the town of Dulce just below the Colorado border in north central New Mexico. The name Jicarilla is said to be from the Spanish word for “little basket.” Jicarilla is the Spanish diminutive (little) for the word jicara, which, according to linguistic scholars, is a Hispanicization of the Mexican Nahua word xicalli. The xicalli, or jicara, was the gourd-like fruit of the Central Mexican jicaro tree. The term was also used for the round, wide-mouth drinking cups that were made from this fruit, and eventually the word became synonymous with any kind of drinking vessel, especially those used by Mexican Indians for chocolate.

At the time of the Spanish Entrada into New Mexico, the Jicarilla Apaches were manufacturing gourd-shaped, piñon pitch covered, waterproof baskets that were used to carry water. It is speculated by many scholars that these gourd-shaped basketry water bottles resembled the jicaras that were pervasive in Mexico and are the origin of the tribe’s Spanish name. Like their Navajo neighbors, the Jicarilla historically referred to themselves by the Athabascan word Diné, or “the people,” but to the outside world they are now Jicarilla.

No matter the precise origin or etymology of the word, the Jicarilla have been famous for their baskets since long before the coming of the Spanish, and it is a major part of their tribe’s cultural identity. As is typical with Athabascan people, the Jicarillas prefer to work with sumac for their base material, though they will sometimes use willow or mulberry.