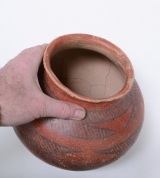 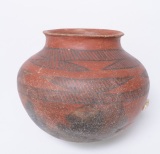 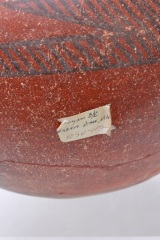 From an older Estate Collection; With older repairs. Looks primary original, with over-paint primarily at the bottom. I assume there might be some front fill on the bottom smoothing it out and then given a simple brown wash but from the interior cracking evident, we can see that jar was likely found in 3 large pieces.

Tusayan Black-on-red is a type of Tsegi Orange Ware found in northern Arizona from the San Juan River to the Little Colorado and widely traded.

Firing: In an oxidizing atmosphere.

Design: Geometric, rarely encircling lines under rim, motifs usually pendant from rim, rim sometimes painted all around, sometimes only where motif is pendent. Narrow and wide lines only, straight or wavy, horizontal or diagonal in squares, triangles or curved panels; horizontal encircling vertically or diagonally in series; hachure and frame lines about same width in the Dogoszhi style.

Compiled from the following sources: