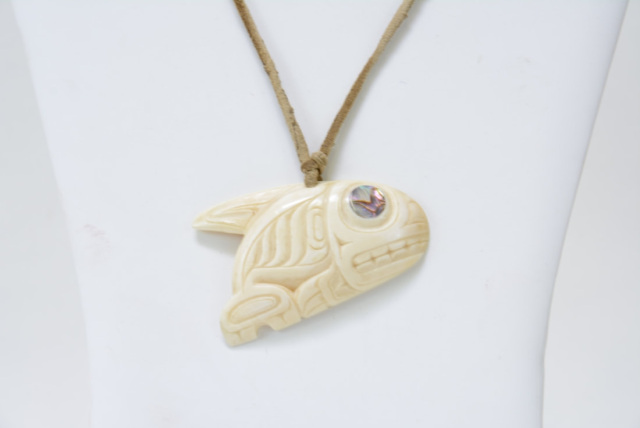 Lelooska was given his name at age 12 when he was adopted by the Nez Perce. It means “He Who Cuts Against Wood with a Knife” and has become a treasured family name symbolic of their work.

Named Gixken, “Chief of Chiefs”, an old title, by the Kwakwaka’wakw (Kwakiutl), Lelooska is the first child of Shona-Hah and was leader of the family. Lelooska and his family were formally adopted into the House of Sewide of the Mamaleleqala and Qwiqwasutnox bands of the Kwakwaka’wakw by Chief James Aul Sewide. With this adoption the hereditary rights, crests and privileges of the Sewide lineage were bestowed on Lelooska and his family.

“I am the most fortunate of the children,” he said, “for I was the one best acquainted with our grandfather—a touchstone of the history and traditions of our people.”

During the years of his childhood, Lelooska and his grandfather He-Killer were inseparable companions. The memory of the hours they spent carving and talking together were very precious to Lelooska.

He-Killer was a man who went forward to meet life. Retaining at all times great pride in his Indian heritage, he served, as a young man, with Troop A of the Fifth Cavalry and later worked with Buffalo Bill Cody.

Although Lelooska was of Cherokee descent, he transcended the normal confines of any single tribe. His life was devoted to the quest for knowledge, which made him an authority on the Indians of North America. Of particular interest to him were “The Cedar and Salmon People”—the tribes of the northwest coast. He made preserving their arts his life work.

Lelooska spoke Chinook Jargon, the trade language of the coast, and was a student of the Kwakwaka’wakw (Kwakiutl) language. He was also conversant in half a dozen Indian dialects. His study of languages gave him insight into the traditional mind and enabled him to communicate freely with the Old People.

“They are the books, the libraries, of Indian culture,” Lelooska said.

He devoted a great deal of time to research for the educational programs, and he also experimented from research to develop techniques for the family’s artwork. These techniques were then refined and modified by family members for their own use.

“Experimentation is part of our own ongoing education,” he explained.

Lelooska’s work is highly prized by collectors. He was primarily a wood sculptor, well known for his versatility. His pieces range is size from those that can be held in the palm of the hand to huge totem poles. Opening masks, carved panels, feast bowls, rattles and animal sculpture are a few examples of the types of carvings which he enjoyed making.

A man of commanding presence and a scholar, Lelooska had great charm and was extremely witty, all of which made him a favorite with people of all age groups and backgrounds.

Of the family’s work and lifestyle, Chief Lelooska said, “Our grandfather advised us to take the best of both worlds–the Indian’s and the non-Indian’s–and combine them so that they would complement and enrich each other. This we have done, but, always, our Indianness is the focus of our lives.

“There is much we must do. Before the coming of the white man, the Northwest Coast Peoples had a highly developed and complex culture. All facets of it were expressed in their art forms. But when their way of life was disrupted, so much of the art was lost and destroyed that all of it may never be recovered.

“I plan to spend the rest of my life helping save what I can. But even if I live to be a hundred, I will only scratch the surface of what needs to be done.”

Chief Lelooska passed away in September of 1996. The chieftancy was passed to his brother, Tsungani. His legacy of educational programs continues to this day at the Lelooska Cultural Center, where young and old come to learn from the living history programs, museum collection and other activities.