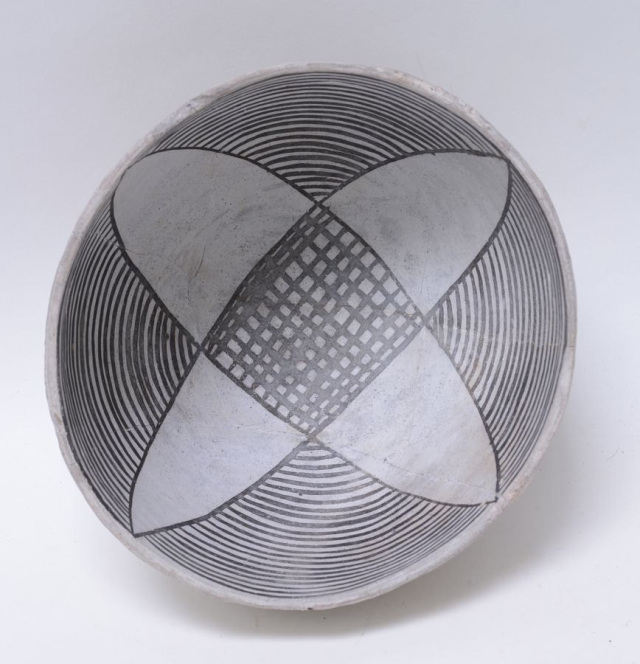 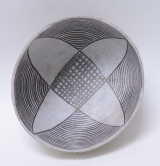 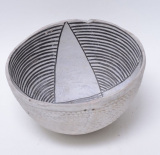 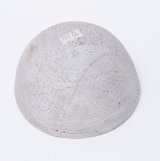 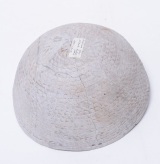 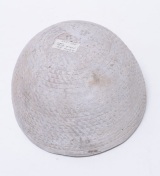 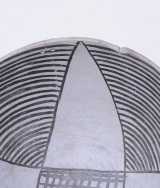 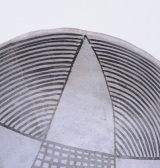 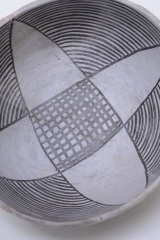 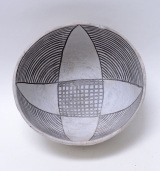 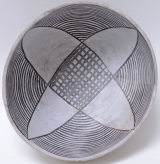 Pottery that would now be described as Chaco-McElmo Black-on-white was first described by Roberts (1927) as Chaco-San Juan Black-on-white. The term Chaco variety of McElmo Black-on-white was used by Vivian and Matthews (1965) to describe organic painted pottery with early Pueblo III styles from Kin Kletso in Chaco but they appear to have lumped pottery associated with the Chuska, San Juan, and Tusayan tradition into this type (Windes 1985). Since then descriptions of Chaco-McElmo Black-on-white have focused on the characterization of pottery exhibiting characteristics indicative of production of distinct organic painted forms known to have been produced in Chaco Canyon and surrounding areas (Franklin 1982, Toll and McKenna 1997; Windes 1984; 1985).

Chaco McElmo Black-on-white shares a number of attributes with mineral painted types associated with the Cibola or Chaco tradition. The shift in paint and designs and sometimes been interpreted as reflecting influence from the Northern San Juan region to the north. As the name implies, this type reflects both the continuation of use of clay, temper, slips, and forms earlier employed in the Chaco Canyon area as well as the adoption of organic paint and styles similar to those noted for McElmo Black-on-white produced in the Northern San Juan region. Another pottery type that may resemble and influence this pottery is Nava Black-on-white of the Chuska tradition and is commonly associated with Chaco McElmo Black-on-white.

Decorated pottery in later Pueblo III assemblages appears to be dominated by forms that are indistinguishable from pottery produced in the Mesa Verde region and is commonly assigned to Mesa Verde Black-on-white and seem to indicate a replacement of Cibola types by Northern San Juan types. Chaco McElmo Black-on-white shares characteristics noted in the latest mineral painted Chaco types including white pastes, sherd temper, thin hard walls, and a similar streaky white paste over well- polished surface (Windes 1985; Windes and McKenna 1989). Thin application of these slips on the lower areas of bowls and jars and its absence in lower portions of painted surface is also a characteristic of other late mineral painted white wares from the Chaco Canyon area. Often a narrow slip is applied just under the rim on exteriors of bowls and interiors of jars. In some cases the bowl exterior is so highly polished it is difficult to distinguish slip from the paste (Windes 1985). Designs are often executed in a faded purplish organic paint. Designs are quite distinct, and hatched elements common in earlier types, are rare. Designs are quite varied displaying the wide range of motifs occurring of early Pueblo III forms. These include barbed lines, checkered squares and dots, isolated dots, parallel lines and banded line. Decorations are almost always organized in a single painted band design. Elements making up these designs are fairly broad and simple. A common style consists of a series of broad lines either in bands parallel to the rim or in rectilinear panels. Framing lines may be present, but they are usually single and may either be isolated or intersect other design elements. Rims are flat to round and may exhibit ticking in the form of simple dots or lines. The range of vessel forms are similar to that noted for Chaco Black-on-white and bowls and distinct pitchers continued to be popular.