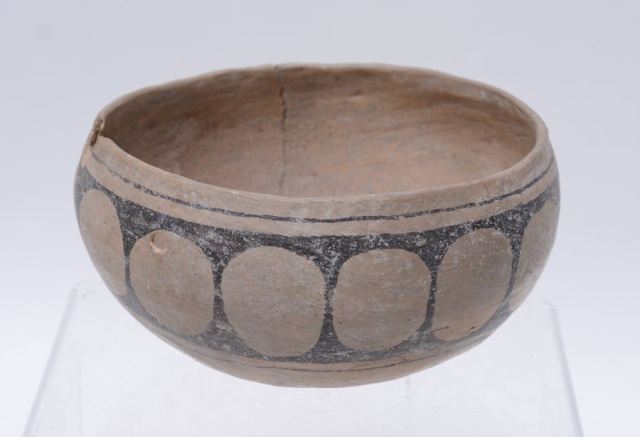 With two probe holes, one on rim, and one vertical expansion crack.. General wear, but overall in Excellent Condition.

The term biscuit ware was first applied by Kidder (1915) to describe the distinct pottery from Classic period ruins in the Pajarito Plateau and Santa Fe Valley. While biscuit wares appear to have developed directly out of Santa Fe Black-on-white and Wiyo Black-on-white, biscuit wares exhibit characteristics that are quite distinct from earlier pottery types (Graves and Eckhart 1998). Pastes of biscuit ware types reflect the use of bentonitic clays and vitric tuff temper. Pastes are extremely soft and surfaces are easily scratched or eroded. Vessels appear have been lowly fired and often make a dull sound or ring when tapped. Sherds break along a straight cleavage. Biscuit wares are extremely porous in texture and noticeably light for their size as compared to other pottery types. Pastes are variable in color ranging from gray, tan yellow, to a brown color, and cores are rare. Slips appear as a distinct layer of very fine clay added to the surface or surfaces that were decorated. Slips range from an off white, tan, to grayish color and are always well-polished. While this darker color has sometimes resulted in the assignment of biscuit wares to "black-on-gray" types, I prefer to describe these biscuit ware forms as black-on-white given similarities in color of earlier types such as Wiyo Black-on-white. The slipped surface is decorated by a deep black organic paint that tends to be even in consistency and color. The presence of a dark well-controlled organic paint in vessels that appear to have been fired in a low temperature and variable atmosphere was a remarkable accomplishment, and reflects the use of slip clays that retain carbon organic paint during the firing of vessels.

The distribution of clays with such qualities may been geographically restricted, and it may in part correspond with the relative limited area over which biscuit wares and related later pottery forms were produced. Biscuit wares are tempered with an extremely small light colored crushed tuff or ash. Temper reflects the additional addition of very fine tuff or ash fragments which tend to be smaller and denser than in earlier Rio Grande types. Fragments tend to be very angular with rod shape spicules being common. Biscuit wares reflect the dominant decorated pottery at Classic period assemblages in the Tewa Basin, Chama Valley, and Pajarito Plateau (Mera 1934). Biscuit ware bowls are further assigned to specific more narrowly dated formal types based on temporal trends concerning the distribution of polish, painted decoration, and slip on one or one surface. Thus, while biscuit wares are represented by both bowls and jars, only bowls are assigned to specific types. Bowl forms assigned to these two distinct formal types (including Abiquiu Black-on-white or Biscuit A and Bandelier Black-on-white or Biscuit B) and are described and illustrated in this site separately.