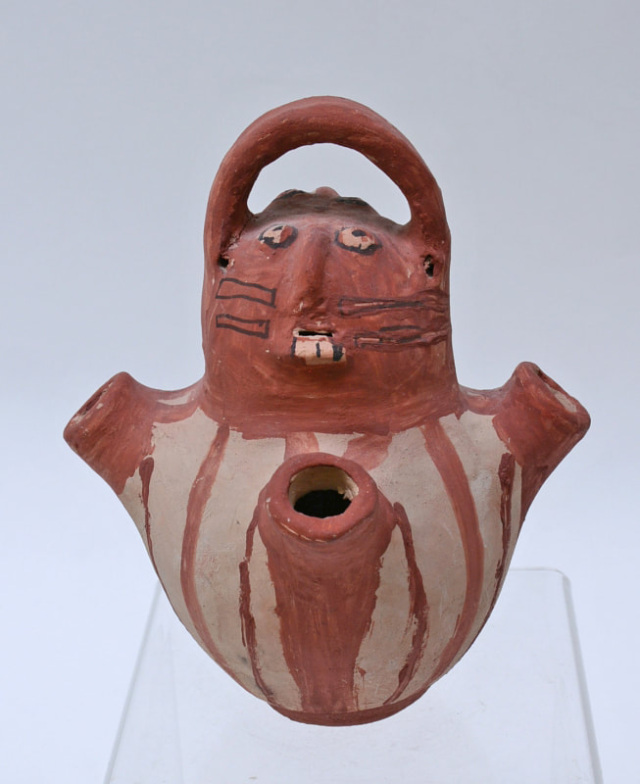 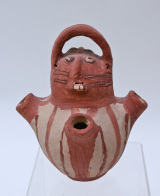 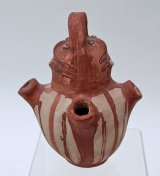 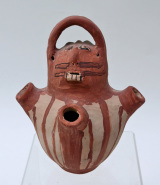 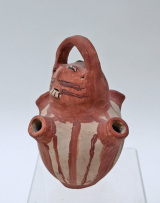 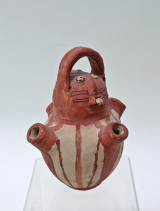 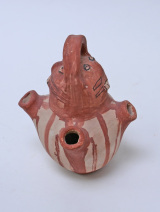 A relative rare item and it's unusual size and primitive nature provides a compelling example.

In the nineteenth and twentieth centuries, the Mojave, or aha macav ("people who live along the river") continued a long tradition of pottery-making, adapting to the new Euro-American tourist market. Gathering clay along the Colorado River in Southern California, Mojave craftswomen formed ceramic utilitarian vessels, human and animal effigies, and dolls. While these forms continue an older ceramic tradition, Mojave potters began to generate new artistic styles while incorporating new materials, such as trade cloth and commercial paint.

Considered a woman's art, Mojave craftswomen traditionally made ceramics during the dry season in a location outside of the home. Utilitarian pots for storage, cooking, and eating were generally plain or decorated with simple geometric designs in yellow ochre which turned red in the firing process. The advent of the tourist trade brought adaptations to these wares, such as the addition of handles to the pots.

Unlike utilitarian ceramics, Mojave effigies and dolls were painted brightly, and were modeled from unfired clay, making the figurines quite fragile. Mojave women produced both human and animal effigies, in both figural and vessel form. Craftswomen also created clay dolls to sell to tourists, emphasizing the head, eyes, and large feet of the dolls, which allowed the figures to stand unaided. Male and female dolls were dressed traditionally and painted with different tattoo patterns to represent their gender. Male dolls wear cloth breechclouts while female dolls appear in cloth skirts. Both wear beaded necklaces and earrings, and horsehair for hair.