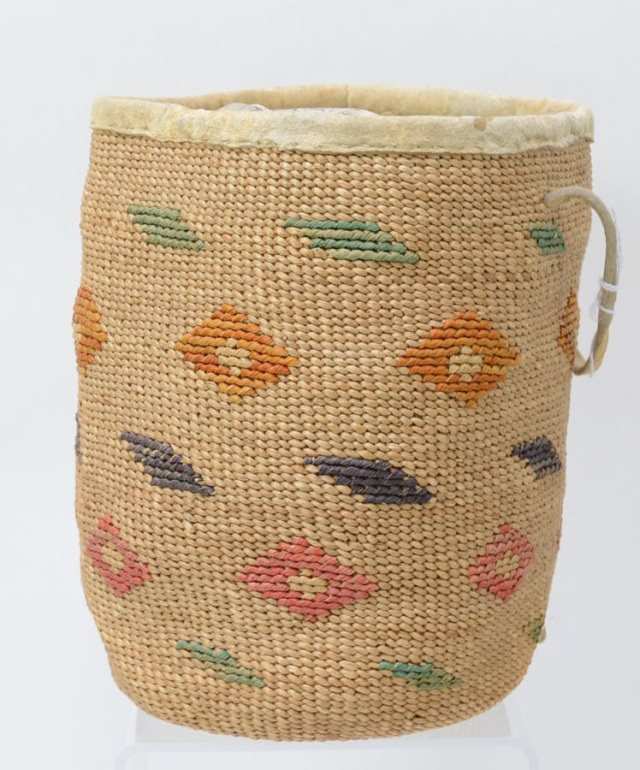 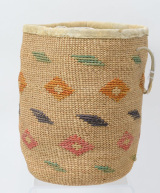 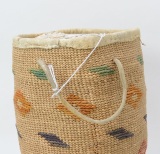 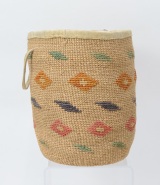 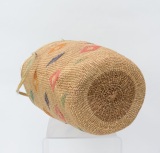 With hide reinforced rim and loop, cloth lining and with very minor overall wear, this beautiful example has strong form, deep colors to the dyed husk and Excellent Overall Condition.

Sally bags, known as wapaas and aqw’alkt respectively among the Wasco and Wishxam people, are woven with a unique full-turn twining method long practiced by Native Americans of the mid-Columbia River region. The baskets were used primarily by women engaged in gathering roots and medicines during the digging season, but they were also used to gather nuts, seeds, and mushrooms. Traditional human figures and animal motifs, such as frogs, condors, dogs, salmon, and sturgeon adorned these highly valued baskets, making them easily distinguishable from other basketry styles. Prior to contact with Euro Americans in the early nineteenth century, the baskets were constructed primarily of dogbane (Apacynum cannabinum, also known as Indian hemp); after contact, they were often made with manufactured cotton, hemp, or jute twines.

Knowledge of the full-turn twining technique was nearly lost in 1971 with the death of Louise Van Pelt Sconawah Spino, then the only known basket maker using the traditional Wasco-style weaving method. However, through the effort of tribal elders from the Yakama and Warm Springs reservations, Mary Schlick, and her apprentices, the artform has survived and been revitalized. Today, artists like Gold and her sister are preserving the use of traditional figures and motifs in their baskets. At the same time, they are infusing baskets with new images and social commentary—much like their ancestors before them had done.

Flexible cylindrical baskets, also known as 'sally bags,' are a hallmark of Columbia Plateau weaving. Historically often identified with Wasco and Wishram peoples, they were also produced by neighboring groups like Umatilla, Nez Perce and Cayuse. Over time, traditional fibers like dogbane and grasses have been augmented with other materials, including cornhusks, yarn, and even beads. Rims are often finished with leather, with loops to attach the basket to a belt. Sally bags could thus be used to carry and store roots and other foods, as well as medicines and personal items