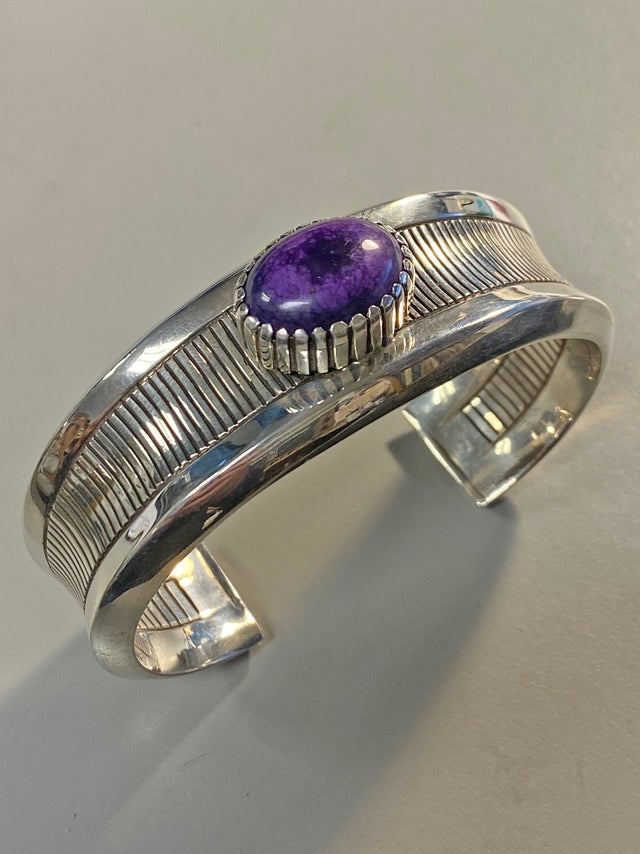 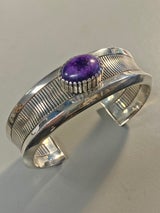 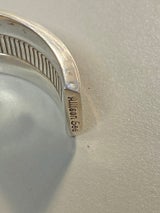 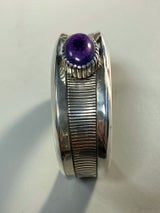 Beautiful Sugilite stone setting on an outstanding silver cuff which exhibits a concave form and a high hand cut bezel.

Allison is an award-winning artist from Mexican Springs, New Mexico. He is a full-blooded Navajo and is the third oldest of eight (four brothers and three sisters). Allison currently resides in Albuquerque, New Mexico with his three sons, Wyatt, Kyle and Trent. He enjoys spending time outdoors hunting, fishing, hiking, and camping with his family.

When there was a boom in Indian Jewelry in the early seventies, Allison’s mother and uncle started making Squash Blossoms. At the young age of 14, Allison was asked by his mother to make a silver ring with a Turquoise stone. He made the ring well and so began his interest in jewelry making.

Allison graduated from Tohatchi High School, during the summers he worked at various silver shops in the Gallup area, where he perfected the methods of silversmithing from the top silversmiths in the shops.

Allison began competing in juried art shows back in 1988 and today continues this tradition of competition. He has received many top awards, such as: Best of Division at the Santa Fe Indian Market, the George C. West Memorial Award for Excellence in Silver Jewelry (which he has won three years in a row), and at Indian Market in Santa Fe, NM.

Recently, Allison was asked to join in on making a piece for the millennium sampler concha belt along with twelve renowned Indian Market jewelers. He was very honored to be chosen to participate in this collaboration. The proceeds of this auction benefited the Southwestern Association for Indian Arts (SWAIA).