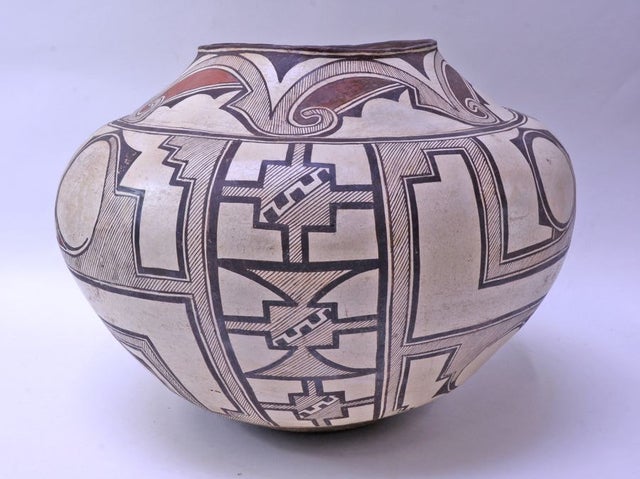 Has had some cracks professionally repaired.

"Tsayutitsa was also known as Mrs. (Luark) Moomchuti/Lahih. The potter known as Tsayutitsa is one of only two potters of the early 1900s whose name is recognized by many students of Zuni Pueblo pottery. (The other is Catalina Zunie). This recognition is primarily because of the research of Jonathan Batkin, who reported in 1987. 'In the 1920s about a dozen good potters worked at Zuni. Among these was a great master, Tsayutitsa, whose work is unmistakable. Her finest pieces are large and radically shaped, with swollen shoulders, and are decorated with marvelous designs that perfectly accentuate the extreme forms.' (Batkin: Pottery of the Pueblos of New Mexico)

"It has heretofore proven impossible to identify her with certainty and to reconstruct her biographical data. Batkin mentioned that, because her Indian name was difficult to pronounce, many people referred to her as 'Mrs. Milam's mother.' In fact, 'Mrs. Milam's mother' is incorrect; it should have been Mrs. Malani's mother.'

"Reading censuses for variations on the name Tsayutitsa was largely unproductive. Only when we began to search for the name in association with the name Malani were we able to identify her definitely. She was born about 1871, according to tribal records, but census reports list 1862 - 1881. C. G. Wallace staged a celebration for her in 1954, when he said she was 90 years old, putting her birth as 1864. Her maiden name was Luark. She was married twice, first to Moomchuti (also spelled Moenauti) and later (after 1924) to Lahih. Lahih died before 1930. She had daughters Cayusetsa (born about 1898) and Zoe (Lahi) Jamon (born about 1896). Cayusetsa married Malani by the time she was 18. Cayusetsa Luark Malani and Zoe Jamon also became potters...."

We will refer to this potter with the recognized spelling of her name Tsayutitsa. This jar had cracks and old glue which were professionally restored.