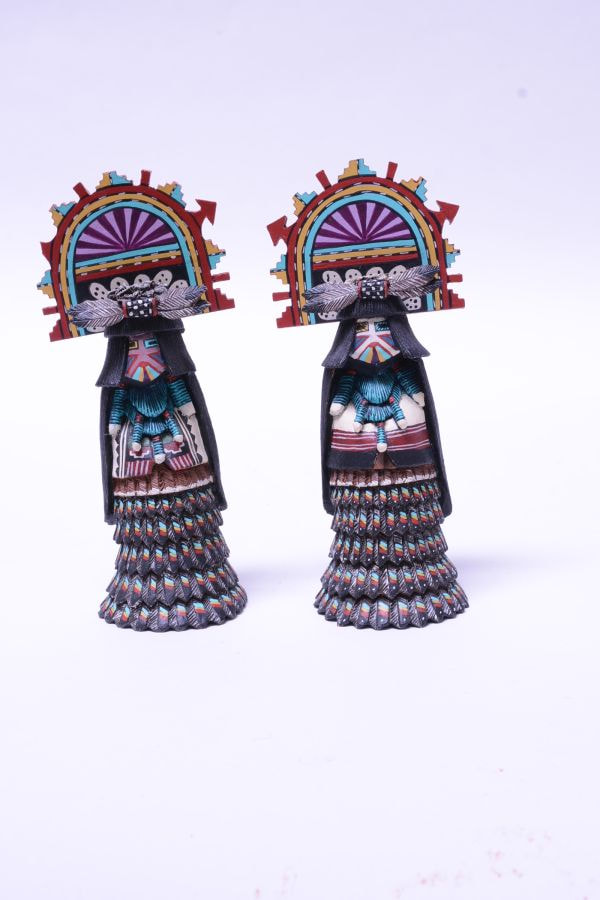 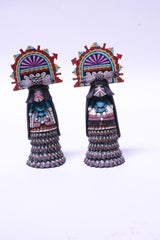 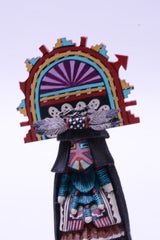 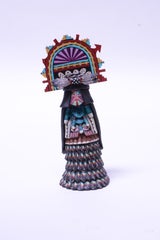 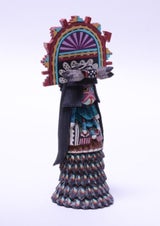 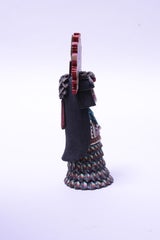 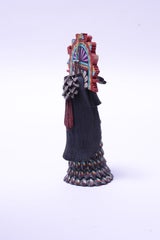 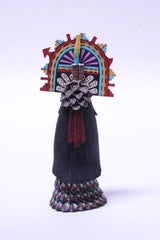 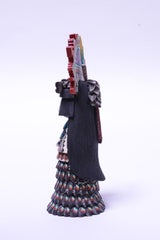 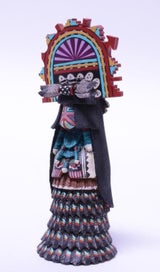 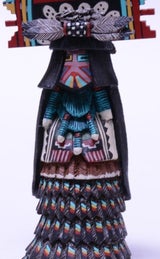 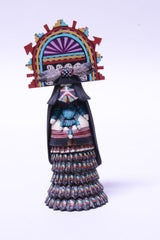 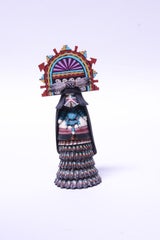 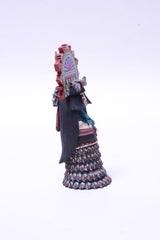 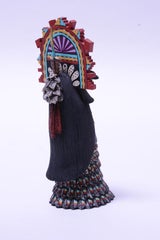 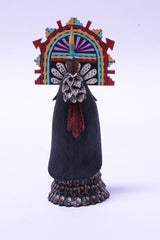 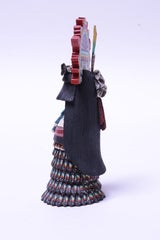 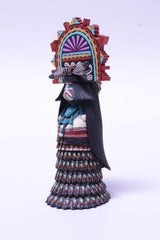 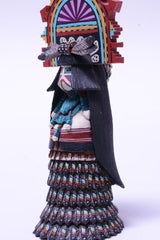 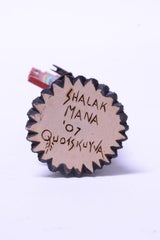 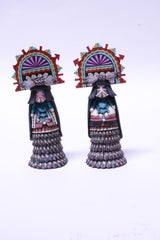 Note: SHALAKO TAKA - one arrow on tableta is broken and can be restored on request. Price has been reduced due to this damage and is being sold as is.

The Shalako Taka (Male) and Mana (female) are considered to be the oldest and most sacred Katsinam of Hopi. The ceremony is held only once every 7 to 10 years and due to its importance is closed to the public. The Shalako Katsinam represent cloud people of the highest order. It is believed that they have performed for over a thousand years, and their power seems to be strongest of all Katsinam since the things expected from nature always occur during the ceremony. Everything on the Shalako Katisinam represents rain falling and clouds. The hair is cut in a geometric pattern that represents a cloud and the hair itself represents rain. The headdress is a series of clouds, lighting, rainbows, and rain with feathers that are soft eagle fluffs. These feathers represent the female rains, which are considered to be gentle rains that are important to us because they soak into the earth instead of running off. In my carving, I take artistic license by including the rainbows and the color black to represent the underworld with a white dot to represent the mist or dew that creates the rainbow." GQ

Gerry’s remarkable style has been nationally recognized on a public television series titled “Living in Balance on Shatki-Hill” which featured entertainers, healers and artists in the Sedona area. His work has also been featured in the books “Art of the Hopi” by Jerry and Lois Jacka, “Katsina” edited by Zena Pearlstone, and “Ancestral Echoes” a 10 year retrospective published in conjunction with his solo exhibit also titled “Ancestral Echoes”. Some of his pieces have been selected to adorn art show posters including the Hopi Tu-Tsootsvolla show in Sedona and the West Valley Invitational Native American Arts Festival in Litchfield Park.

Gerry has garnered numerous awards for his carvings and paintings from museum shows including the Heard Museum, Arizona State Museum, Museum of Northern Arizona, Sharlot Hall Museum, Eiteljorg Museum in Indianapolis and Santa Fe Indian Market. His work was also showcased at the group exhibits “From the Earth” at the American Indian Contemporary

Arts Gallery in San Francisco, “Art of the Mesas” at Tubac Center Of the Arts, and “Contemporary Katsinam”, a nine-month exhibit at UCLA’s Fowler Museum in Los Angeles.

Gerry is currently working on a permanent collection for Xavier University in Cincinnati that consists of over fifty pieces including a 48” double Shalako carving titled “Sacred Rites”.