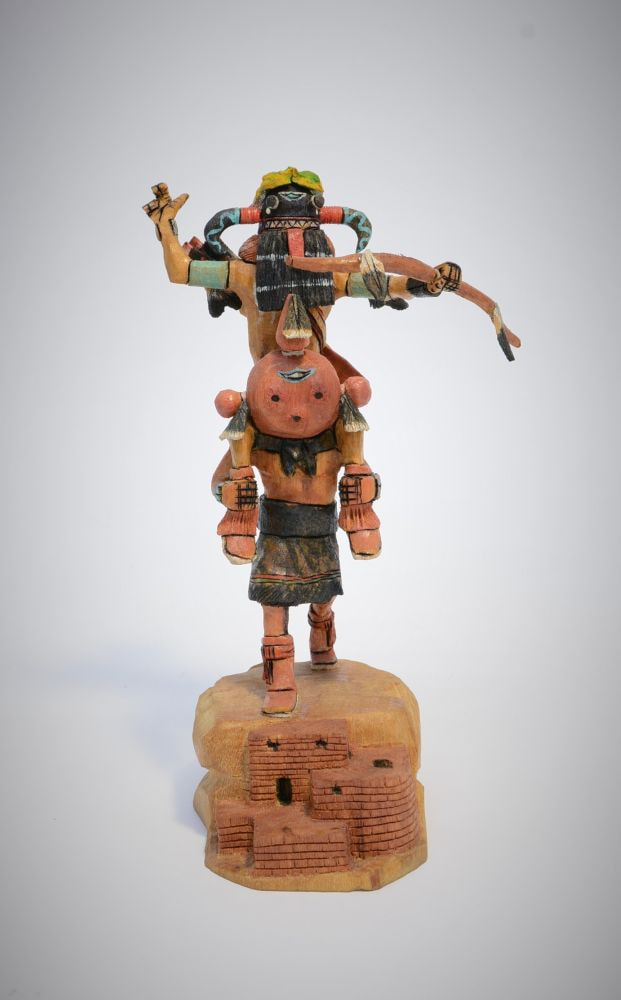 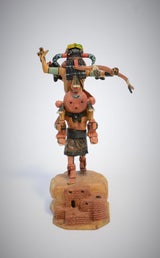 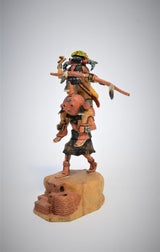 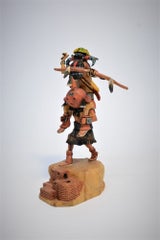 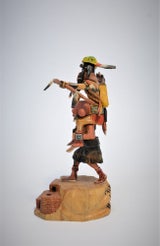 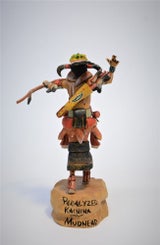 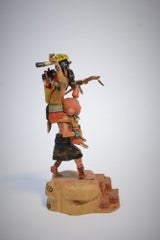 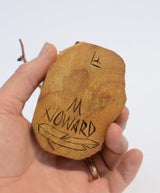 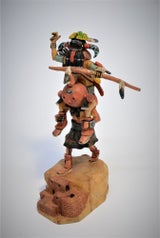 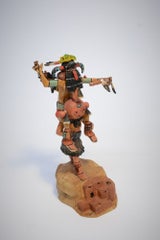 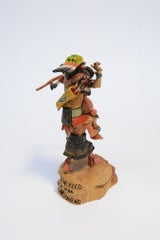 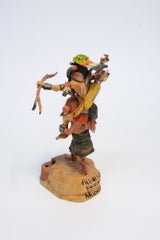 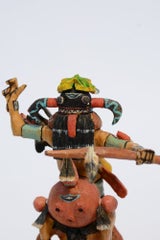 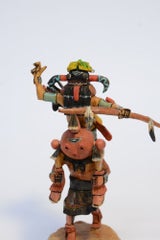 "The Hopis have a legend they retell about two Kachina spirits – Tuhavi (Paralyzed Kachina) and the Koyemsi (Blind Mudhead). Many years ago the tribe had to move from where they lived, either because of drought or warfare. With no horses, they were forced to travel on foot. Two members could not make the journey. One was crippled and the other was blind. They were left with some food and a tearful goodbye – as everyone expected them to die.

Instead the crippled man climbed onto the back of the other and directed him where to walk – also he was able to shoot his bow and arrow to hunt. Together, they survived by cooperating despite their individual weaknesses. The Hopis made kachinas spirits in honor of these two and teach their children how we can overcome problems by working together.

The end of the story was only recently told to me by an elder Hopi man. The Blind Mudhead and Crippled Kachina were roasting rabbit over a campfire when they were approached by a huge and scary Ogre Kachina. The two looked at each other thinking, “just when we were going to survive!” The Ogre pulled back an arrow on his bow, first pointing it at them, and then pointing it down at the fire.

The Ogre let the arrow fly into the fire and ashes went into the eyes of the Blind Kachina. He rubbed his eyes and could suddenly see again. When the sparks flew up from the fire, they also landed on the legs of the Crippled Kachina. He jumped up to escape the burning sparks and found he could stand and walk again. Healed of their afflictions, they set off and eventually caught up to the tribe and had a joyful reunion."

Milton Howard is easily one of the most sought after artists of his generation. Born on the Navajo-Hopi Reservation in Tuba City, Arizona in 1964. His father is from the Third Mesa area. His mother is from the Rocky Ridge area. Milton eventually moved to Albuquerque, New Mexico and spent his early adult life there. He is has grown children and lives in Arizona. Milton's father was also a carver, and he learned his craft from his father and other members of his family who shared his father’s passion. Before launching his career as a full time carver of Katsina collector dolls, Milton Howard gained certification as an electrician. His first sale of a Katsina doll was to a classmate while he was in his early twenties and still studying for his electrician’s certificate. During this time he spent much of his free time exploring the art of Katsina doll carving with his cousins, and began to take orders from classmates and friends. Though Milton Howard's talent was obvious to all those around him, he did not take up carving seriously until he moved to Phoenix. Here he honed his skills as a carver of Hopi Katsina dolls, and his name quickly began to spread as a coveted artist for collectors around the world. At the age of thirty, Milton Howard decided to dedicate his time completely to his Katsina carving talents. His collector Katsina dolls are now found all around the world in fine art galleries as well as in private collections. Though Howard’s immense talent are obvious to even the most casual observer, one additionally element to his success has been the fact that he offers these amazing pieces as rather modest prices, so even collectors with limited budgets can own one of his spectacular Katsina dolls. Though Milton Howard remains dedicated to the traditions of his heritage, he has also learned to express himself through his collector Katsina dolls with a delightful and readily recognized sense of humor. Many of his Katsina dolls will depict non-traditional scenes, but with accurately detailed representations of the Katsinam he cherishes as sacred symbols of his Hopi culture. Here at Kachina House we’re proud to offer such a large selection of Milton Howard’s collector Katsina dolls. Our prices reflect his dedication to keeping his artwork reasonably priced and available to collectors everywhere. Milton Howard uses only the finest materials, and carves each Katsina doll by hand.