Joining the family business full-time in 1985, Matt has since traveled extensively throughout the United States researching, buying and selling fine North American Indian art and artifacts. He lectures in both private and public settings, with a particular focus on the history and analysis of Navajo rugs, native basketry and pueblo pottery. He also exhibits his finest artifacts at major trade shows across the nation throughout the year.

Married to his life partner Cynthia, and having raised two daughters and now with three grandchildren, Matt is looking forward to sharing his story, and the artifacts he has found, with you. 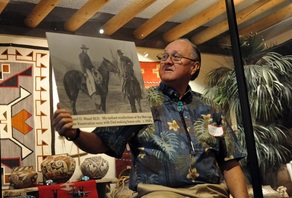 "I would be crushed if someone bought a rug just because of its color or size.  It's more than matching mauve to the chair and drapery.  Something that has survived generations brings the wisdom and integrity of the early generations.  To own it and not be sensitive to it is a lost opportunity." - Len Wood

As a child, Len remembers riding horseback through the desert with his father, a medical doctor, on the Morongo Indian Reservation, just west of Palm Springs, as his father made house calls.  His early interactions with Native Culture was but a precursor to his life's path. As an outdoors man,  craftsman, and one eternally curious about the natural world, Len's study of Native American art and history is simply part of his persona.

Several years after marrying his high school sweetheart, Antoinette,  Len's interest in Native Americans led to developing a relationship with a band of Cree Indians led by Chief Small Boy of Alberta, Canada. In trying to assist Chief Small Boy's wish to forgo reservation life and sustain a more traditional lifestyle of "living off the land in tipis," Len was asked if he could help by selling the traditional beaded moose hide moccasins, gauntlet gloves, jackets and other items that Small Boy's band was making.  A short time later, Len and Toni opened Len Wood's Indian Territory, their first gallery location in Laguna Beach, California.

In 2013, Len was pleased to announce the expansion of his business with the grand opening of Matt Wood's Antique American Indian Art, llc, run by his middle son, Matt.

Calling Laguna Beach home since 1942, and together with his wife Toni, Len has raised 3 sons, has 6 grand children and 3 great-grandchildren .... and of course, has "Miss Daisy" ... their Yellow Lab, at his side.

Jennifer represents the third generation of Wood family members in this family trade. She began working alongside Matt and Len Wood in her early childhood, greeting the public and polishing jewelry. In 2005, Jennifer joined the family business at a professional level, and ever since she has been assisting Matt with gallery operations. She currently is gallery manager at our new location in Bothell, WA.

Jennifer has attended trade shows, lectures and private consultations all throughout her life, giving her a unique perspective on the industry that not many of her age have.  She hopes to foster a greater awareness and appreciation of antique Native American art & artifacts among the younger generations, including the Millennials.