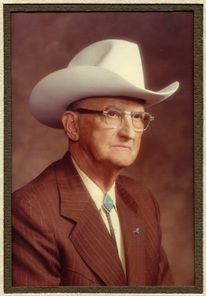 Born in Richmond County, North Carolina in 1898, C. G. Wallace found his life's calling at Zuni Pueblo, New Mexico at the age of 20.

In 1918, Wallace arrived in Gallup, New Mexico and in 1919 he was hired by Louis Ilfeld at the Ilfeld Company to work at their trading post in Zuni, NM. After acquiring his trading license at Zuni Pueblo, Wallace set out to transform the lives of the Zuni people - 1,600 Zunis at the time - by encouraging them to produce high-quality silver jewelry with stone inlay for the tourist trade.

Desiring a strong and fruitful relationship with the Zuni people, Wallace dedicated himself to becoming "totally acquainted" with the entire Zuni village (Wallace's own words). "He spent 'many nights each week' after the store closed visiting the Indians in their homes and seeking to build their trust in him"  (1).

"When I came to Zuni, they gambled, they played and they didn't do much work at all. I made up my mind that I'd have every man, woman and child working -- and by the time I left just about all of them were." - CG Wallace, interview with Arizona Highways. 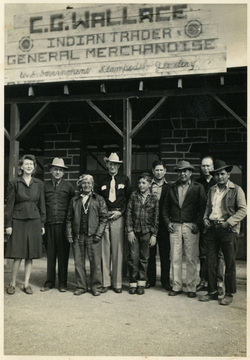 Gene Cain collection - digitally scanned by AAIA, Inc.
Over time, Wallace became proficient in both the Zuni and Navajo languages, and spoke some Spanish as well.

After working for the Ilfeld Company for a few years, Wallace purchased the Zuni trading post outright. The 1920s and 1930s were years dedicated to a new way of thinking - despite tough financial times and a changing market (ie. the Great Depression, the arrival of the Santa Fe Railroad & Route 66) Wallace saw opportunity for increased tourist trade and jewelry sales for Zuni Pueblo.

Wallace introduced new jewelry equipment and encouraged the incorporation of turquoise inlay in silverwork. He obtained great quantities of fine turquoise from the Southwestern turquoise and copper mines, providing Zuni artists with an abundance of turquoise to place in their jewelry, through channel inlay, mosaic inlay, petit point and needlepoint techniques.

Wallace promoted the use of traditional motifs as well, bringing over 600 examples of old pottery and other artifacts to Zuni artists as sources for inspiration. In a thirty-year span, between 1920 and 1950, Zuni jewelry-related tribal income increased from four to 65 percent. (2)

"One of his main goals in life was to bring Zuni jewelry to the world"  - Elizabeth Chestnut, former director of the Indian Pueblo Cultural Center 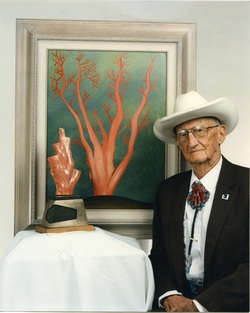 "While compiling his collection of more than 2,500 items, Mr. Wallace used the same standards of individuality and irrepeatability that he encouraged in the artists who made them."

"Once a piece went into my collection, I never sold it," Wallace said. (1)

In 1975, Wallace, at the age of 76, recognized the need to have his collection relocated so that it might be appreciated by future generations. Around five hundred pieces went to the Heard Museum in Phoenix, Arizona. The remaining majority of his collection was sold at auction in November of 1975 through Sotheby's, at the Adams Hotel in Phoenix.

C. G. Wallace passed away in 1993.
From the Eva Wallace Cain - Gene Cain Collection
(sister & nephew to C.G. Wallace)
Jewelry Available for Purchase
1. As quoted in The C.G. Wallace Collection of American Indian Art. Sotheby Park Bernet, 1975, from an interview that appeared in Arizona Highways.
2. http://www.nps.gov/history/nr/travel/route66/de_anza_motor_lodge_albuquerque.html