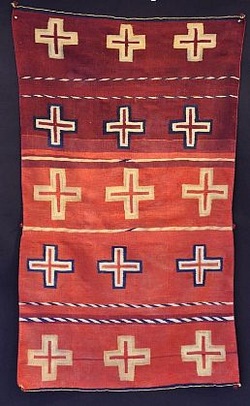 "The Navajo ... work their wool with more delicacy and taste than the Spaniards. "   Governor Fernando de Chacon in a letter written in 1795

"Their woolen fabrics are the most valuable in our province."
Pedro Pino, Exposicion del Nuevo Mexico, 1812, on Navajo weaving

Today, when discussing early Navajo blankets, we encounter terms such as "Fine Bayetta Serape", "Diyugu Serape" or " Early Chiefs Blanket," which are terms descriptive of a blanket type, indicate an early age, and further suggest a certain rarity. Additionally, recognized as objets d'art, the terms "Eye Dazzler" or lexicon such as "beautifully stratified carded fields of gray" delves into recognizing the authentic artistic merit of the blanket.

Pueblo Teachers - The Pueblo Revolt of 1680 and Spanish Reconquest of 1692
(key points are highlighted in brown ... they are not links)

In 1598 Juan de Onate led a Spanish expedition into the Rio Grande valley which established Spanish rule for 80 years. With the exception of the revolt at Acoma Pueblo, which was promptly and harshly put down resulting in 24 men having one foot amputated and enslaving hundreds of others,  the overall resistance was sporadic and unorganized until 1680.  As the Native Pueblo population shrank from 40,000 to 15,000 during this period, the Pueblos organized a simultaneous revolt, known as The Pueblo Revolt of 1680,  which drove the Spanish south to El Paso and gained a short-lived independence.

The Spanish returned 12 years later, 1692, in a relatively bloodless reconquest, and during this time many of the Pueblo fled to live with the Navajo. Semi-nomadic, dispersed over a very large territory, good horseman, warriors, and difficult for the Spanish to attack, the Navajo represented both a safe harbor and an opportunity to counter attack. Pueblo men (who were the traditional weavers of the Pueblos) and Pueblo women intermarried with the Navajo and it was at this point in history that we trace the beginnings of Navajo weaving.

Weaving was likely instinctively recognized as "woman's work" in the Navajo culture. Replacing the traditional Pueblo weaving material of cotton with the new, sturdier wool of the Spanish churro sheep, the Navajo women quickly became masters of the art form.  The earliest textiles all borrow heavily from Pueblo design and technique. The remarkable quality of the Navajo of borrowing ideas of another culture and making it their own is often seen when one studies the history of the Navajo.

Classic and Late Classic Blanket Period - The Beginning of the Trade

The Navajo horse herds increased significantly during the 18th century, and concurrently, the Navajo tribe had expanded and grown. By 1800, the blanket trade became well-established and was a common garment, as is noted in the quotes that lead off this page.

In the winter 1804-1805, the Spanish Governor, Chacon, tired of the constant raiding and fighting with the Navajo, sent troops into the Navajo stronghold of Canyon de Chelly hoping for a decisive battle. Although most the Navajo fled to avoid conflict, a number hid in a cave, and when found, all were killed in a hail of bullets.  Known as Massacre Cave, it is from this site that some of the earliest known documented blanket fragments have been found.   The majority of the blanket fragments showed simple banded patterns in both plain weave and twill weave which are thought to  be typical of the styles of both Navajo and Pueblo weaving of the 18th century.
-----
Classic Period 1800-1865

The Navajo were influenced by everything around them.  To the Navajos, the Pueblos brought the loom, the Spanish the churro sheep, and later the Spanish/Mexicans the blanket design incorporating diamonds.

The evolution of the Navajo blanket designs, from simple bands and stripes to more elaborate and complex patterns including terraced diamonds and zigzags, occurred very rapidly.

If a progression can be found, it may be that bands began to incorporate a zigzag element similar to the Navajo wedding basket , and then this became incorporated with diamond motifs which were common to the Spanish/Mexican Blankets.

1807 - Two Spanish weavers were sent from Mexico City to Santa Fe to teach local colonial weavers the patterns and styles of the Saltillo Serape.  The Navajo, seeing these new patterns, likely were influenced to try to make a competing blanket.

1821 - Mexico gained independence from Spain and took over New Mexico. This led to the opening of the Santa Fe Trail connecting St. Louis, Mo. to Santa Fe and established a major trading route.  Dyes, bayetta trade cloth, and yarns were just some of the items to arrive to the Navajo via the Trail.

1821-1846 - Constant warfare between the Navajo and the Mexicans in New Mexico occurred as both sides raided each other, the Mexicans for Navajo slaves, and the Navajo for livestock and recovering those taken slaves.

1846 - American commander, Brigadier General Stephen Kearny advances on Santa Fe, the Mexicans give up the territory without a fight, and Kearny promises protection and citizenship of Mexicans remaining in the newly claimed US territory. New Mexico and Arizona are officially annexed by United States in 1848.

1846-1862 - A difficult period for the Navajo as conflicts with the Americans, the New Mexicans, and raiding Utes and Apaches continued. As the Navajo did not have a central authority speaking for all tribal members, treaties made between Navajo and the US were constantly broken.

1820-1860 - Blankets woven by the Navajo taken by the Mexicans as slaves were woven to their Masters tastes, and consequently, a Navajo loomed blanket with New Mexican (Mexican) influences were woven.  These rare blankets are known in the collecting world as Slave Blankets.

1862 - 1868 -  Tired of dealing with continual violence, US War Department commissions Colonel Christopher "Kit" Carson to take care of the "Indian Problem." Starving the Navajo out by destroying crops and livestock and ruining watering holes, the Navajo submitted to Carson and began surrendering in numbers by 1863.  By 1865, most of the surviving Navajo had  made "The Long Walk" of over 400 miles from their homeland to an interment camp in Southeastern New Mexico, known as the Bosque Redondo where Fort Sumner was located.

The Bosque Redondo period was a terrible time for the Navajo as disease and lack of supplies kept the Navajo at near-starvation levels. From 1864-1868 over 2000 of the 8000 Navajo had died, with another 1000 escaping.  It is interesting to note that during the internment, the Navajo received between 1000-4000 Rio Grande blankets to use, which consequently brought new motif elements and designs to the Navajo weavers, who later incorporated some into their own weavings.

1868 - Treaty - Reservation life begins:  The US allowed the Navajo to return to their homeland and trading posts were subsequently established to develop a trade between the Navajo and the US. After an eighteen-month delay, in 1870, 15,000 sheep were delivered as stipulated in the treaty, but they were Merino with the inferior short, kinky and greasy wool, not the Churro sheep with the long, silky smooth wool. The poor wool quality of the Merino led to an increased usage of commercial yarns and wools traded for.  Additionally, during the early reservation period (1868-1900), poor breeding techniques such as inbreeding (partly a result of a newly restricted property boundaries  stipulated by the treaty)  led to a steady decline of this already inferior wool. Note:  A small number of Churro had survived in the wild, or were taken care of by the few, non-captured Navajo and so we see a small number of early reservation blankets with Churro wool.