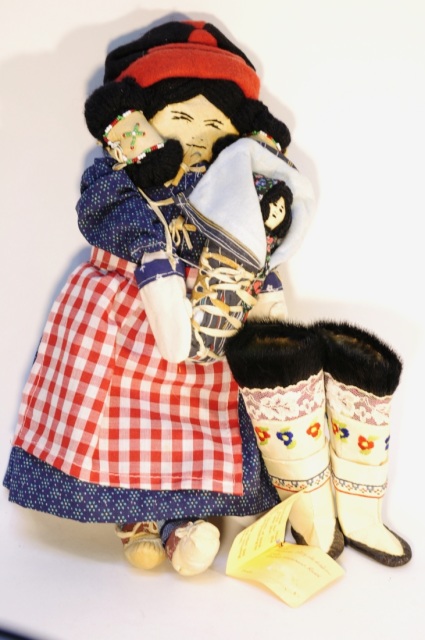 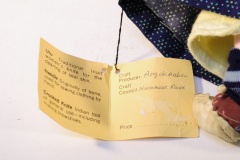 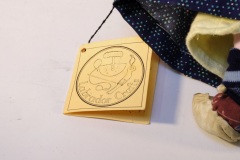 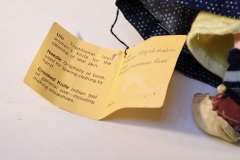 As late as the 1950s, the Innu people of Labrador still followed an ageless tradition of moving twice each year in pursuit of their primary sources of food. Every winter, families packed up and moved to the interior of Labrador to follow the caribou herds and hunt and trap. In summer, they moved back to the coast to live off fish, seals and sea birds. Summers were also the time to visit the trading posts. Black tea, valued by both the elders and the hunters as a source of energy, was always high on an Innu shopping list.

As everyone who has ever moved knows, space is at a premium when you're packing up all your belongings. For the Innu, who had to carry everything (including their tents) on snowshoes and toboggans in the winter and by birch bark canoes in the summer, space was especially limited. Everyone had to take a share of the load, including the children. During the summers, mothers made dolls of caribou hide for the children and stuffed them with a pound or two of tea leaves. The child's new toy was also a small contribution to the family's critical need for space. When the larger tea supply ran out, the adults would "borrow" the doll and cut it open to retrieve the extra cache of tea leaves. The doll would then be re-stuffed with grass, leaves or moss and returned to the child. This custom of the tea dolls also taught the children an important lesson in Innu culture - to share with elders and hunters.

No one knows exactly when the tea doll tradition began. Madeleine Michelin, 68, of Sheshatshiu, had a tea doll as a child and remembers many stories of her mother and grandmother also playing with the dolls. The Smithsonian Institute collection contains several dolls obtained in the early 1880s from Innu people who traded at the Hudson's Bay Company post at Old Fort Chimo, Labrador.

By the middle of the 20th century, infringements on Innu territory and a severely reduced caribou herd had limited the Innu's ability to hunt and trap. Their traditional migratory lifestyle destroyed, the Labrador Innu were moved permanently into two communities, Sheshatshiu and Davis Inlet. While the Innu are no longer migratory, Innu women continue to make the tea dolls to ensure that this part of their history will not be forgotten. Doll-makers follow their own designs and each doll is unique. Although the earliest dolls were made almost entirely from caribou hide, most contemporary makers use a combination of caribou hide and cloth. Some embellish the moccasins and hats with beading, and some add details such as a canvas coat, a hunting bag, or a baby tea doll.

Labrador is the distinct northerly region of the Canadian province of Newfoundland and Labrador. It comprises the mainland portion of the province, separated from the island of Newfoundland by the Strait of Belle Isle. It is the largest and northernmost geographical region in Atlantic Canada.

Labrador occupies the eastern part of the Labrador Peninsula. It is bordered to the west and the south by the Canadian province of Quebec. Labrador also shares a small land border with the Canadian territory of Nunavut on Killiniq Island.

Though Labrador's area is over twice that of the island of Newfoundland, it has only 8% of the province's population. The aboriginal peoples of Labrador include the Northern Inuit of Nunatsiavut, the Southern Inuit-Métis of Nunatukavut (NunatuKavut), and the Innu. Many of the non-aboriginal population in Labrador did not permanently settle in Labrador until the natural resource developments of the 1940s and 1950s. Before the 1950s, very few non-aboriginal people lived in Labrador year round. The few European immigrants who worked seasonally for foreign merchants and brought their families were known as Settlers.