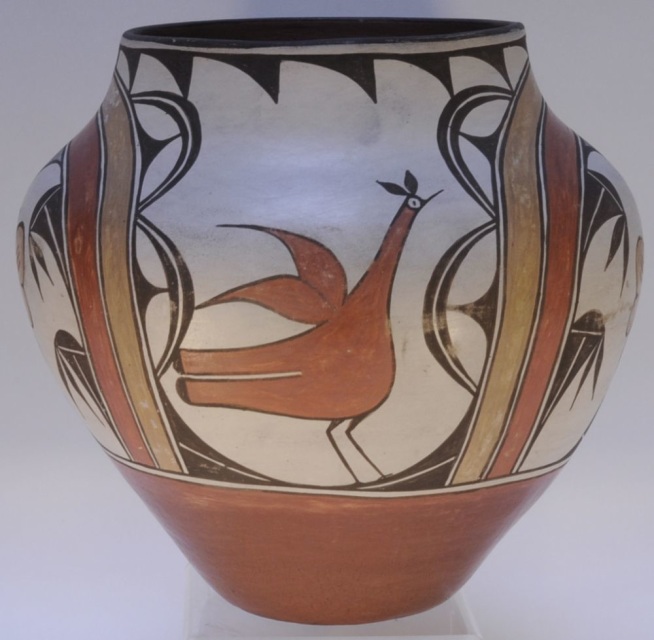 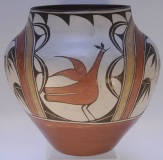 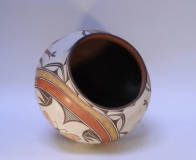 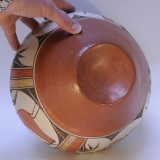 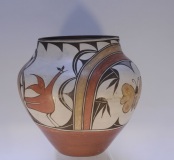 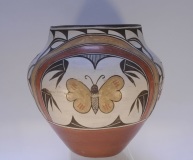 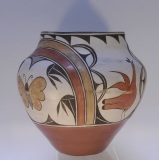 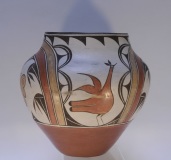 Juana Lupita Toribio Pino (ca.1890-1987) Ts’iyasgits’a was from Zia Pueblo. She was recognized for her potting skills as early as 1922, when she received a second Dougan Fund Prize of $3.00 at the first Southwest Indian Fair in Santa Fe. She was also awarded two prizes, first and second, for her pottery at the second Southwest Indian Fair in 1923, and she was awarded another first prize for “best piece of pottery” from Zia Pueblo at the Santa Fe Fiesta in 1924.

Source: The Pottery of Zia Pueblo by Harlow and Lanmon, 2003

This potter has been identified as Juana, Juanita, and Juanito over the years. The potter signed the jar Juanita Pino, so we will use that name. According to Harlow and Lanmon, Pino was recognized as an outstanding potter as early as 1922 at the first Southwest Indian Fair in Santa Fe. She continued winning prizes at subsequent events in Santa Fe, Albuquerque, and Gallup. She was the mother of Sofia Medina.

The cream slip of this jar features a warm polished surface and patina that would suggest an age of 50 to 60 years. The orange/red rainbow bands are highly polished, with a beautiful and rarely seen yellow band and with both bird and butterfly motif.