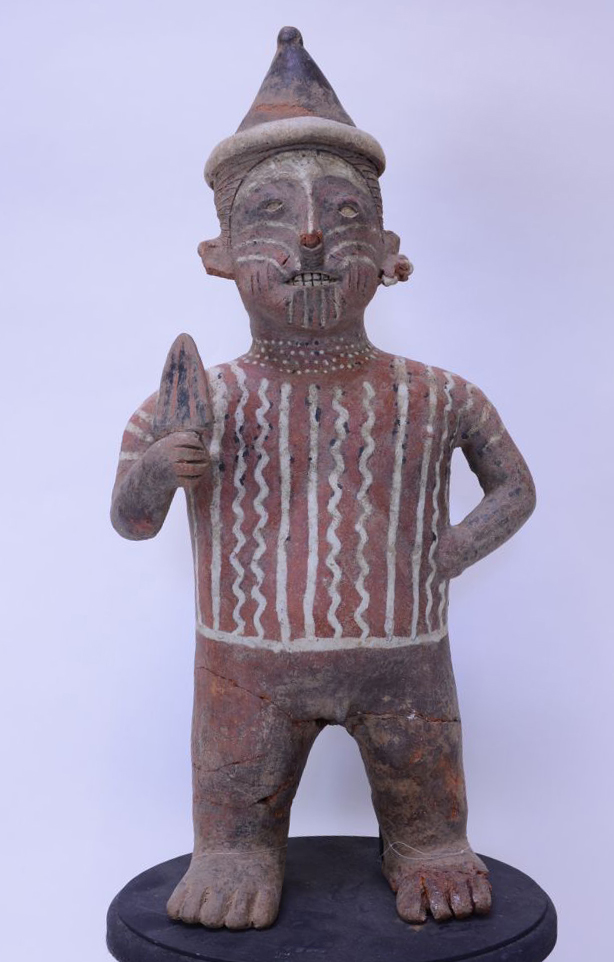 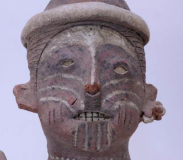 Sold as a Set with Female as pictured on site

Pre-Columbian, West Mexico, Nayarit, Ixtlan Del Rio style, Protoclassic Period, ca. 100 BCE to 250 CE. A wonderful hand-built pottery Male and female figures standing upon stocky feet and delineated legs. Make holding a dagger in the right hand with well defined facial features. A large olla with white spots rests atop her shoulder, and her other ringlet-adorned arm is held aloft with an outward-facing palm. The stylized visage is comprised of heavy-lidded ovoid eyes, a prominent nose adorned with a pair of plugs, a narrow mouth with incised teeth, and tall ears . Deep red slip with white detail paint covers the entire figures and imbues them with a presentation characteristic of ancient West Mexico. Size: 10.5″ W x 18.75″ H (26.7 cm x 47.6 cm).

Clay figures like this one are the only remains that we have today of a sophisticated and unique culture in West Mexico. They made no above-ground monuments or sculptures, at least that we know of, which is in strong contrast to developments elsewhere in ancient Mesoamerica. Instead, their tombs were their lasting works of art: skeletons arrayed radially with their feet positioned inward, and clay offerings, like this one, placed alongside the walls facing inward, near the skulls. A large effigy like this one would most likely have flanked the entrance to a tomb in a way that archaeologists have interpreted as guarding. Some scholars have connected these dynamic sculptures of the living as a strong contrast to the skeletal remains whose space they shared, as if they mediated between the living and the dead.

for information on Pre-Columbian culture: