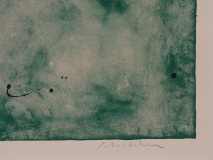 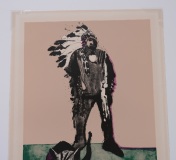 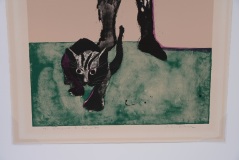 Edition of 100 plus proofs

Born in Breckenridge, Minnesota, Fritz Scholder became a prominent Indian portrait, figure, and genre painter in Arizona. His father was part Indian, and Fritz Scholder chose to focus his art work on this part of his lineage and to express both an appreciation and disdain for Indian customs, traditions, and daily existence.

He studied at the University of Kansas, Wisconsin State University, and with Wayne Thiebaud at Sacramento College in California. He earned an Master of Fine Arts Degree from the University of Arizona. A long-time resident of Scottsdale, Arizona, he has filled a number of artist-in-residence positions including Dartmouth College and the Oklahoma Summer Arts Institute.

In his work, he frequently showed the harsh, realistic side of Indians' lives and deaths including the affects of alcohol and other dissipations, but some of his depictions are humorous such as Indians on horseback carrying umbrellas. His brush-work is generally swift, and the tone often sombre and surreal. A major influence on his work was the contemporary British artist, Francis Bacon, from whom Scholder adapted ironic distortions into his canvases.

In Scottsdale, he lived in an adobe-walled oasis of palm trees and oleander, amid skulls and skeletons. In the garden, several of Mr. Scholder's sculptures feature skull-like heads. In the library, an 18th-century skull engraved with witchcraft symbols shared shelf space with books printed before 1500. And the porch had been converted into a skull room, complete with Mexican Day of the Dead paraphernalia that spill from cabinets and rest on shelves and antique chairs.

In a "New York Times" interview, August 12, 2001, Scholder said that in spite of the death-related items with which he surrounds himself, "I consider myself a natural optimist which might be surprising, because I like the dark side of things. That's simply because of intellectual curiosity. I celebrate each day. I truly wake up happy every morning."

In appearance he was rather heavy set with shoulder-length hair and a radiant smile. He was shy and idiosyncratic including the driving of a gold 1979 Rolls-Royce fitted with tinted windows.

In his childhood, where he was the fifth sibling in a primarily German family, he showed a passion for collecting, which has dominated his largely autobiographical art. His career includes etchings, aquatints, lithographs, monotypes, photographs, collages, sculpture and mixed media, but he is best known for his paintings.

Fritz Scholder died February 10, 2005 at age 67 in Scottsdale, and a memorial service was held at the Heard Museum in Phoenix. He was married to Lisa Markgraf Fisher and had one son. In his artwork, death had been a constant preoccupation for Scholder. He said: "Death is completely fearful, a terrible violence that intrudes into what people believe. It's not what I want to think about, but it's there and is either the worst practical joke in creation or the fault of whoever made all this up."