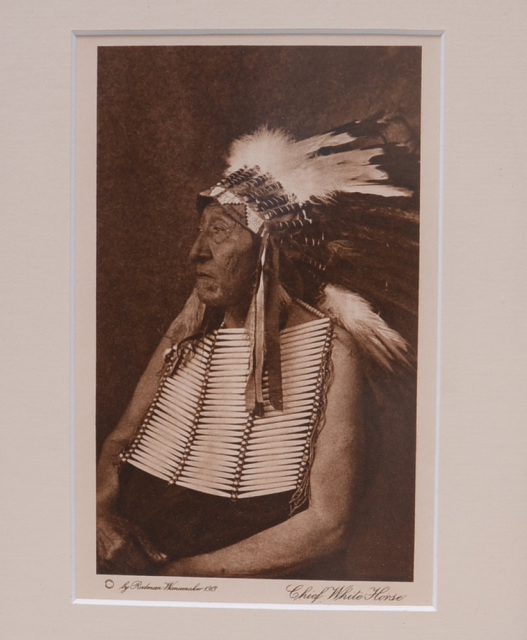 Here is a 2012 release by the Museum at the Michigan State University with related information on the photography.

A Tribute to Susan Applegate Krouse. MSU’s Department of Anthropology and American Indian Studies Program is sponsoring the exhibit, which will feature more than 8,000 images taken between 1908 and 1923 by Joseph K. Dixon. The individuals depicted represent more than 150 tribes. This collection of photographs of American Indians is thought to be one of the largest created by a single photographic enterprise, according a university press release.

The tribute to Susan Applegate Krouse couldn’t be more appropriate. Krouse studied at Indian University, where she helped catalogue the collection, making it far more accessible to viewers in North America and around the world. While at MSU, Krouse was the associate professor of anthropology in the College of Science, as well as the director of the American Indian Studies program.

While at the Mathers Museum, at Indian University, the Wanamaker Collection helped serve a variety of research interests. “The primary ethnographic and historical value of the collection is as a record and reflection of Native American life in the first decades of the 20th century,” the Mathers Museum website stated. “By the sheer quantity of photographs, the collection presents a wide view of Indian life, including several dimensions of culture change (documenting clothing decoration, dance styles, etc.), economic situation (relative wealth/poverty), and acculturation/participation in the non-Indian world, including the military.”

The collection came into being thanks to Rodman Wanamaker, son of the famous store owner. In 1908, Rodman sponsored a series of “Expeditions to the American Indian,” which were headed by the photographer Dixon. This ‘expedition’ went to Crow Agency, Montana, where they produced a motion picture of the epic poem The Song of Hiawatha, which was written by Henry Wadsworth Longfellow in 1855, and loosely based on legends of the Ojibwe, as well as other tribes. While filming, Dixon photographed around Little Big Horn, as well as shooting the anual Crow Fair.

Dixon and his crew came back to Crow Agency year later in 1909. There Dixon took photos of a number of important chiefs and American Indian leaders in what was billed a Last Great Indian Council, as well as taking portraits of survivors of the Battle of Little Big Horn.

Later in 1909, Dixon and the Wanamakers found themselves becoming increasingly active in the American Indian policy reform movement. The National American Indian Memorial, which was dedicated in February, 1913, was part of their efforts. Unfortunately this project, which was supposed to be a monument that would stand on a bluff overlooking the Narrows, the main entrance to the New York Harbor, was never completed.

After World War I, Dixon also began using his camera to document American Indian involvement in the United States military. He questioned both the Army divisional historians as well as the American Indian veterans themselves. The evidence of his research and efforts have been crystalized for future generations thanks to his camera, and the work of dozens throughout the years who have maintained this collection, most notably Susan Krouse, who’s groundbreaking book North American Indians in the Great War serves as the only academic publication on this crucially important collection.

If you’re in the area (The Michigan State Museum’s website can be accessed here) we strongly recommend you check it out.