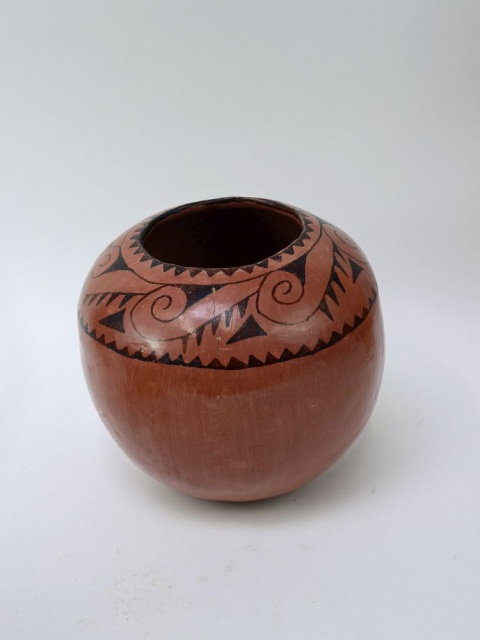 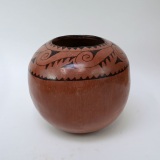 has a 4" hairline vertical crack from rim as pictured

Although unsigned, this is in the style of Ida Redbird and is associated with an Ida Rebird bowl collected.

Ida Redbird (1892-1971) was a Maricopa potter from the Gila River Indian Community of the Gila River Indian Reservation in Arizona. She was the first president of the Maricopa Pottery Maker's Association and was widely credited with the revival of ancient Maricopa pottery techniques and forms. Her polished black-on-redware pottery was highly prized with collectors. Texas photographer Ted Sayles shot a series documenting Redbird sculpting her pottery. The series toured museums throughout the Western United States

The Maricopa Pottery and Maricopa Tribal people are best known for their red clay pottery work. Various jars and bowls were created for essential needs, made of natural materials. The clay was collected at various locations throughout the area. Natural dyes were used to depict geometrical designs.

The Maricopa people were small bands living along the lower Gila and Colorado rivers. Each of these bands migrated eastward at different times. The Xalychidom (Maricopa of Lehi), left around 1825-1830.

The last of these bands is said to have left the Colorado River in the late 1830’s. Eventually, these bands came together and became collectively known as the Maricopa.

As they migrated eastward, they came upon the Pima tribe and established a relationship. Both tribes provided protection against the Yuman and Apache tribes.