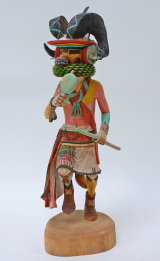 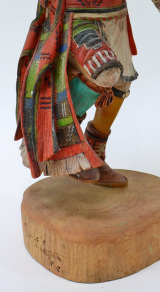 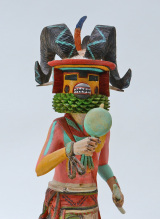 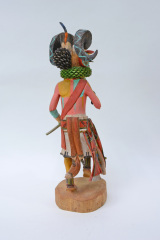 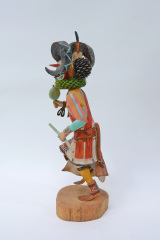 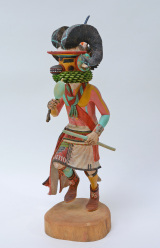 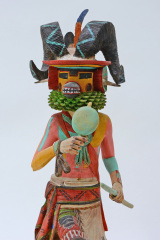 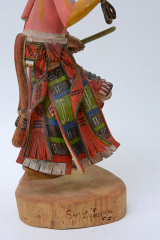 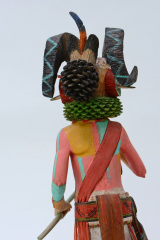 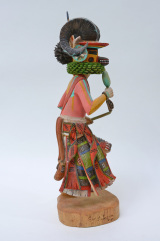 Sam Kayquoptewa , a member of the Rabbit/Tobacco Clan, lives in the village of Hotevilla on Third Mesa on the Hopi Reservation.

He is from a family of talented siblings who are basket weavers and katsina doll carvers. He is an award winning carver, having won both the 2003 and 2004 Award of Excellence in Katsina Doll Carving, Southwest Indian Art Fair, Arizona State Museum, Phoenix, Arizona.

His work is in the collection of the National Cowboy & Western Heritage Museum in Oklahoma City, OK.

This Big Horn, or Ram kachina (Pang), is a great example of Sam's ability as a detailer. The horns, feathers, clothing (sash is particularly well done), jewelry and rattle have all been carefully carved, as well as the hands, and fingers. His posture and anatomy add an increased level of realism to the piece.

The Ram Kachina is said to be used to secure an increase of flocks - however little is known about the details of the origin or meaning of this particular figure.

It is known that it belongs to the "animal" family of kachina figures, and as a "two horn" figure, it is of this world - and not other-worldly as are some of it's "single horn" counterparts, so it is said.