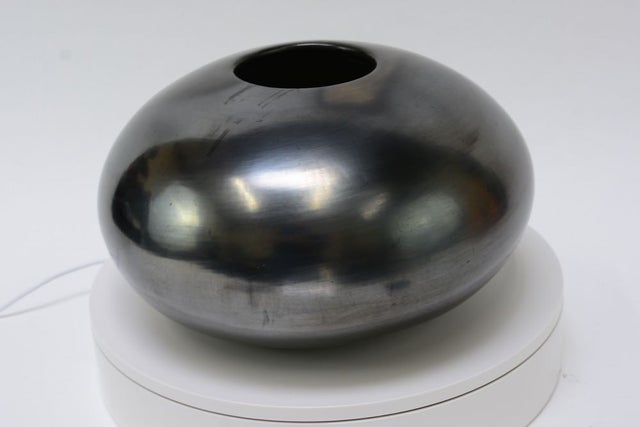 Price and Availability on Request

With a 1969 Hear Museum Guild Third Award ; Gunmetal overall,  you will notice some slight color change near the top; a monumental masterpiece and one of the great jars from S&A.

Following Julian's death in 1943, Adam and Santana helped Maria with the design and firing of her pottery. Pieces during this collaboration were made between 1943 and 1954, and are signed "Maria + Santana." Additionally, this husband and wife team produced their own pottery such as this masterpiece.

Santana Roybal Martinez (1909-2002) came from a family of respected potters and painters in San Ildefonso Pueblo. Her grandmother, Dominguita Pino Martinez (1860-1948), was well known for her creative black-on-red jars that she made in different forms. Her grandfather, Santiago Martinez (born circa 1858), painted Dominguita's pots. Santana's parents were Alfonsita Martinez Roybal (born circa 1881) and Juan Esteban Roybal. Alfonsita created polychrome pottery and taught Santana's brother, Alfonso Roybal (Awa Tsireh), to paint her pots. Awa Tsireh became one of the best Pueblo Indian painters of all time. Santana's aunt, Tonita Roybal, was also an excellent potter and painter. The United states Postal Service honored Tonita by picturing one of her red and black pots on a United States postage stamp.

In 1926, Santana married Maria Martinez oldest son, Adam Martinez (c.1903-2000). Adam and Santana spent the next eight years living with Maria and Julian. Although she already knew well how to make pottery, she learned Maria's way of working the clay and learned Julian's method of painting.

After Julian passed away, Santana painted Maria's pottery for thirteen years, from 1943 to 1956. They made mostly black-on-black pottery. The signatures on that pottery were either "Marie + Santana" or "Maria + Santana." Those were Maria's most prolific years.

In 1956, Maria began making pottery with her son, Popovi Da. Santana split off and continued making pottery with Adam. Santana did the potting, painting and polishing while Adam gathered the clay and collected wood and horse manure or cow chips for the firing process. They signed their pottery "Santana + Adam."