Learn About the Art > About Indian Basketry > Eastern Basketry 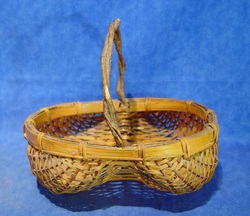 The primary  materials for eastern basketry include:

Black ash:
Minimal fine grain and a satiny sheen to the flat (often very thin
splints)  It ages from bright white to shades of warm tan still retaining its sheen.  It is often dyed to a great variety of colors that usually fade with age.  Principal splint material of the Great Lakes and Northeast.

White oak:
Known as "Basket Oak".. When split across the grain, lines are somewhat wide and irregularly spaced.  Oak sapwood, when split with the annual rings for splints, is almost pure white.  With protective aging, it develops a warm, golden brown. Exposed to the weatgher, it grays. Southeastern material, principally Cherokee.


Hickory: Similar in appearance to Oak, but with a finer, more uniformly parallel grain. New splints are light creamy color, darkening with age to a rich, deep, red-brown.  Hickory baskets are usually heavy for their size and the splints generally
thicker than oak.


Sweetgrass:
A fine, round, greenish gray grass with a sweet, vanilla-like fragrance, which is sometimes maintained to great age.  It is bundled in coiling as well as braided, and is used from the Great Lakes area straight across through the  Northeast.
It ages to a medium tan or brown.  Coils and/or braids are often combined with splints and bark.


Honeysuckle:(Carolina Cherokee)
Round whole stems, possessing fairly regular long striations with viewed through a magnifier.  Quite a smooth sheen when viewed from a normal distance.  The bark has been stripped and it is used white as well as dyed yellow, orange, maroons, and browns.  It is used singly, but also in combinations with oak handles, bindings, and splints capable of being used in a fine wire-like thinness.

Duckbrush: (Oklahoma Cherokee)
Used round, stripped of its bark.  Medium luster when used white, when dyed its typical brown or orange colors, it picks up a flecky discontinuous grain.  It is used as a single material, often in the double-woven style of these people.


Cane:
Split in flat, narrow strips, a s a plaiting material and dyed any color, but principally red, black, orange, and yellow, with natural for a light color;  it is shiny and possesses bamboo-like joints.  It is a Southeastern material, but is used as far north as the Cherokee.


Palmetto:
Employed by the Houma of Louisiana in a looped coiling style, and is also plaited by the Seminole.

This is an  abbreviated list. In all there are probably forty or more eastern materials.