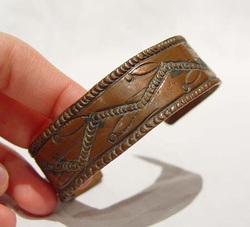 An early Navajo copper bracelet.
The story of the Navajo cannot be told without mention of the silver and turquoise jewelry which they make.

It is most widely accepted that simple copper and brass bracelets - and possibly coin silver bracelets, seen in early photographs of certain headmen of the Navajo during their incarceration at the Bosque Redondo between 1864 and 1870,  pin the beginnings of Navajo jewelry sometime to this period, or slightly before.  It has been suggested that some Navajo blacksmiths may have learned the jewelry making craft by watching Mexican smiths sometime during this period, as there was heavy interaction, including slave raids, between the two peoples. 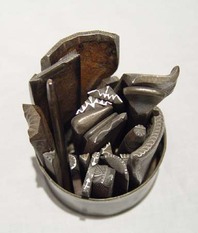 Some of the early tools: punches for stamping
During the early reservation period, 1870-1890 , there were a few noted Navajo silversmiths including Ugly Blacksmith, Thin Silversmith, Grey Mustache, and Old Silversmith. These smiths were located near the first railroad towns (Thoreau, Gallup, Houck) or somewhat close to them (Ganado / Window Rock).  During this earliest period, the smiths used the simplest of tools, primarily hammer, crude anvil, punch and file.  This early heavy jewelry produced were mostly prized family possessions, and became a display of status which became fashionable to wear at ceremonials and important gatherings. As other Navajo began to desire obtaining jewelry, they either had to barter with the jeweler, or try to make some themselves. Consequently, silver jewelry became entrenched within the Navajo culture. Becoming a jeweler itself was a position of power within one's community.

An early anvil for jewelry making.
Beginning in 1880 and most certainly by the mid 1890s, the railroad began influencing all things surrounding the Navajo silversmith.  Small pieces of railroad track were fashioned into anvils, and scrap iron pieces were made into stamps and dyes. Jewelry was traded more commonly, and the Navajo silversmiths working near the railroad had an advantage over those in the more remote regions of the vast Navajo territory, as the increased trade and availability of materials helped these “railroad” Navajo smiths to produce more work, more efficiently.  Anvils were raised off the floor, and a trend towards lighter-weight silver works with thinner, pre-cut, polished turquoise began.

An early Navajo bracelet, with stamping and turquoise.
The earliest pieces with turquoise (circa 1880) are usually made of very heavy ingot silver, with thick, unpolished stone settings and simple tooling. However, due to railroad influence, an uneven development of Navajo jewelry occurred. For example, 1910-era jewelry produced in the remote regions can be similar to the 1880 jewelry of the “railroad“ smiths. Additionally, examples from a beginning smith in 1910, which are generally cruder than works from an experienced smith, may be misidentified as an older example.

The early reservation period (1870-1890) saw the development and steady growth of jewelry making, but by 1910, an entire industry centered on the Anglo tourist had developed. To understand how this occurred, we have to look at the Fred Harvey Company. 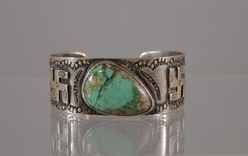 A Fred Harvey era bracelet.
Beginning in 1875 with the opening of the restaurants near Wallace, Kansas and Hugo, Colorado, Fred Harvey envisioned a vast chain of restaurants catering to the railroad tourist.  Although these two initial restaurants closed after a short period, and his initial backer, the Burlington Railroad, backed away from his idea, the Atchison, Topeka and Santa Fe Railroad decided to back Harvey with several restaurant locations in Florence, Kansas in 1878. Soon, thereafter, the “Harvey House” chain began and spread westward, eventually into Navajo territory.  It was here, that Harvey Company entrepreneur, Hermann Schweizer, came up with a business model of consigning silver and turquoise through trading posts (often times located within the Harvey Houses) to the Navajo, who would then make the jewelry and sell it back to the trading post. The sale back both covered the cost of the initial silver and turquoise as well as giving a small profit to the maker.  This consignment of materials out expanded on the ‘Pawn” system which was already established by the original trading posts, and gave the Harvey Company control over production, weight of silver and quality shape, cut and color of stones used.

The popularity of this jewelry was astounding, and to meet the demand more and more silversmiths were hired. “Bench Jewelry” is a term used when describing the style of jewelry that was made by smiths making Harvey style jewelry, as the many smiths often worked together on long benches and tables, all producing similar style work.  Sometimes the jewelry production steps would be broken down, whereas one would cut the silver, another would stamp the designs, another set the stones and do finish work.  Typically, this jewelry was of lower weight,  more quickly made, and had lots of Indian symbols stamped into the silver. Today, there is a revival of interest in this jewelry and is known generically as “Fred Harvey Jewelry” and this style continued well into the 1950s.  There were some quality differences from bench to bench, and today's collectors look for the heavier, more carefully produced examples, but, the highest values are placed on the jewelry that was in the style previous to “the Harvey Style”, e.g. heavier, simpler in design and made for personal adornment and use. 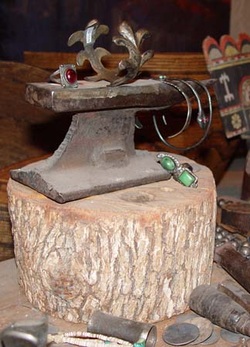 Another jeweler's anvil with some examples of early jewelry.
As popular as it was around the railroad and tourist areas, though, the Navajo themselves (and especially those off the rail such as in the northwestern part of the reservation) didn’t wear the lightweight jewelry. They preferred the old style heavy work. To understand why, we have to explore "Old Pawn."