Learn About the Art > About Indian Basketry > Great Basin Basketry
Please Note: This page is currently under construction. 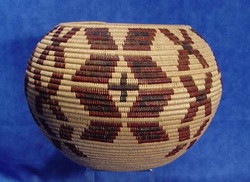 With circa 1900 population estimates of 1500, the Paiute are often broken into three subgroups, the Owens Valley Paiute (also known as the Eastern Mono), the Northern Paiute ranging from SE Oregon, into Western Nevada and into East/Central California (which include the Mono Lake Paiute), and the Southern Paiute  which include the San Juan Paiute south and west of the Grand Canyon in northwestern Arizona, as well as the groups along of the Colorado River basin and into the Mohave desert.

These subgroups have many small bands which cover the large territory.  The band of Paiute that lived specifically in the Owens Valley were the only group that had permanent villages as the environment was rich enough to support people year round.  Most of the other bands had seasonal migrations in the search for food and shelter.

Paiute basketry was diverse and extensive. Twinned baskets were generally utilitarian, such as hats, seed beaters, gathering baskets, parching trays, seed jars and water baskets which were covered with pine pitch.  Coiled baskets were always coiled to the left, and are either with 1, 2 or 3 rods of willow for the foundation.

Generally speaking, the Northern baskets, and particularly with the Mono Lake baskets, we see the coiled works using redbud and bracken fern root for the red and black materials, with sedge and/or willow as the light material whereas the Owens Valley used willow for the light and bracken fern for the dark, and the Southern using willow and black devils claw with some use of red yucca root.

During the 1910-1920 period, the Mono Lake Paiute developed striking globular baskets for the “Indian Days” celebrations in Yosemite Park, with weavers such as Lucy Telles, Tina Charlie, Leanna Tom, Carrie Bethel and others earning prize money… and whose baskets on today’s market command some of the highest prices.  The Paiute coiled basketry is very diverse in motif placement and treatment, in foundation structure, and has a wide range of quality in terms of weave, balance, and form.

The Washoe, whose territory centered at Lake Tahoe and extended on the eastern slopes of the Sierra Nevada mountains into Nevada, extending to Carson City, were noted basket makers, with Washoe Dat-so-la-lee (Louisa Keyser), becoming the most famous of all Native American Basket weavers. Today, very fine coiled baskets by Dat-so-la-lee are often priced between $200,000-1,000,000.

The twined basketry of the Washoe was very similar to the Paiute in technique, form and function. The primary weft was willow (Salix spp.), used whole or split into rods for warp, with the pealed inner bark of the willow branch used for the weft.  Trade with the Miwok brought the redbud for the red weft, and mud dyed bracken fern root were used for the black.  “Sun Burned” willow was sometimes used for a soft brown weft.

Coiled Washoe baskets are coiled left, and woven on either a single rod or a 3-rod foundation, whereas the rods are placed in a triangular fashion, with the top rod resting on the two lower rods.  The weaver attaches one coil to the previous by inserting the awl through the top rod of the finished coil creating a hole for her new sewing material.

Although early Washoe basketry was very similar to the Paiute work, beginning around 1900 and through the 1930s it evolved into more refined forms with artistically executed patterns.  During this period, many of the Washoe weavers began weaving for the collectors market and began entering their work into competitions. Weavers such as Dat-so-la-lee took a leading role in setting high standards and she refined the small mouthed rounded give baskets, known as a Degikup, into a basket of perfect proportions and with design that mimics the proportions.