Learn About the Art > About Indian Basketry > Pacific Northwest Basketry 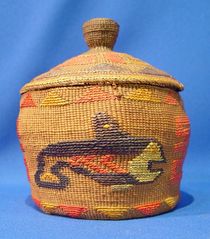 Tlingit "rattle top" basket c 1900
The Tlingit are famous for their fine, colorful, closed twined basketry of spruce root and bear grass (natural and dyed).  Often times, small stones were placed in the knob of the lid and would rattle... hence the term "rattle top" is used to describe such as basket.

Most of the Northwest twined basktry is very fragile, and easily is damaged. Matt Wood's AIAA, Inc. specializes in the restoration of Tlingit basketry.

The Tlingit of southeast Alaska have produced some of the finest examples of two-strand twining; their spruce root baskets exhibit bold geometric designs in warm hues of red, orange, yellow, and brown. In spring and fall, women collected the young roots of the Sitka Spruce, a tradition shared by both men and women today. The bark is peeled from the roots, which are left to cure over the summer. Then they are split and ready for weaving. The baskets are decorated in false embroidery, in which bleached, and often dyed grass is wrapped around the weft; the pattern is visible only on the outside of the basket. Natural dyes were obtained from local materials such as huckleberry, sulphuric mud, moss, hemlock bark, and alder bark steeped in urine. Commercial aniline dyes were popular as early as 1890, marking the beginning of the tourist trade era.
Utilitarian baskets were used to collect berries, roots, and shellfish for storage and for food preparation and serving. The flat-bottomed cylindrical berry basket is an older form. Large berry, or carrying baskets were worn on the back, and the smaller berry picking baskets emptied into them. Spruce root baskets are flexible and non-rigid; large berry baskets were often stored folded flat. Other forms include open-work strainers, plaques, cups, bowls, and rattle-top round boxes in which pebbles or lead shot were placed inside the lid. As the demand for made-for-sale baskets increased, Tlingit wove new forms, such as trays, teacups, and covered glass bottles.
Abstract designs often depict patterns observed in nature, such as the butterfly wing, whale’s teeth, path of the woodworm, tail of the raven, fern frond, and flying goose pattern. Realistic designs often portray animals. Other motifs represent aspects of Tlingit culture, such as tattoos and labrets, as well as patterns adopted from Euroamerican items, like Hudson Bay blankets and the Christian cross.
Materials of Spruce Root Basketry
Roots of the most mature Sitka spruce are gathered in spring or early summer. The bark is removed by roasting the coiled roots which are then left to cure over a summer. When ready, they are softened in water and then split into narrow strips by means of the thumbnail and a knife (traditionally made of a blue mussel shell). The roots are now ready for weaving.
There are five types of Tlingit weaving – all of the twined variety. The standard weave (which resembles the tent stitch in needlepoint), comprises about 75% of all basketry.
Designs are embroidered over the spruce root which was left its natural color. Maidenhair fern was used for dark glossy brown. Other colors were obtained by dying the grasses with natural materials - black from sulphur mud, hemlock bark, or iron filings; red derived by soaking various materials (alder, leaves of nettles, or sea urchin fluid) in urine; yellow from certain mosses and blue green from copper scrapings corroded in urine. Since the early 1900s commercial dyes have been widely used.
Baskets and wooden boxes were the only containers known to the aboriginal Tlingit, so baskets were made in all shapes and sizes- some were woven so tightly that they were used as water buckets and drinking cups. They were used to hold berries, to store oil and fish, for canoe sails and sleeping mats, even as hats. Baskets were also used for cooking pots by dropping hot stones into a basket filled with liquid.

Spruce Root Basketry of the Alaskan Tlingit*
Legend of the Origin of Basketry
It happened in those mysterious times when Raven still walked among men, exercising the cunning of his mind in bringing good to his creatures by ways strange and inexplicable to mankind. Already his greatest works had been accomplished. He had stolen the Sun, Moon and Stars from his grandfather, and thus divided the night from the day. He had set the tides in order. He had filled the streams with fresh water and had scattered abroad the eggs of the salmon and trout so that the Tlingit might have food. But not yet had Raven disappeared into the unknown, taking with him the power of the spirit world to mingle with mankind.
In those days a certain woman who lived in a cloud village had a beautiful daughter of marriageable age. She was greatly desired by all mortals and many came seeking to mate with her. But their wooing was in vain. At last it chanced that the eyes of the Sun rested with desire upon the maiden, and at the end of his day’s travel across the sky he took upon himself the form of a man and sought her for his wife.
Long years they lived together in the Sky-land and many children came to them. But these children were of the Earth-world like their mother and not of the Spirit-world of their father. One day as the mother sat watching her children frolicking in the fields of the Sun-land, her mind filled with anxiety over their future, she plucked some roots and began idly to plait them together in the shape of a basket. Her husband, the Sun, had divined her fears and perplexities So he took the basket which she had unknowingly made and increased its size until it was large enough to hold the mother and her eight children. In it they were lowered to their homeland, the Earth. Their great basket settled near Yakutat on the Alsek River, and that is the reason that the first baskets in southeastern Alaska were made by the Yakutat women.
*by Frances Paul, published by United States Dept. of the Interior, Bureau of Indian Affairs. 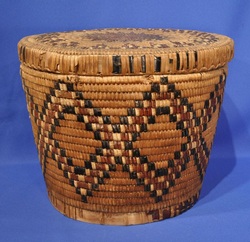 Traditionally, the Coast Salish Indians wove a wide variety of baskets to serve many purposes, including gathering, storing, and preparing food; holding household goods; transporting objects; and protecting their infants. Gathering baskets were commonly used to gather roots, berries, shellfish and other foods. Some gathering baskets had leather loops or carrying straps enabling the user's hands to remain free. Berry baskets were sometimes soft and flexible, so the basket could be folded and stored when not in use.
Clam baskets and other containers used for shellfish harvesting had an open weave that allowed easy rinsing and draining. Openwork baskets were also used for steaming food items such as shellfish while more finely woven, watertight baskets were used to boil foods by adding water and heated rocks. Burden baskets were used for carrying bulky loads such as firewood. These large, sturdy baskets were intended to be worn on the back, and were often secured by a tumpline that passed over the top of the wearer's head.